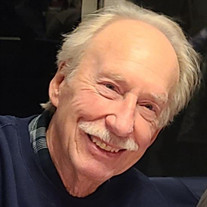 Wayne Robert Kracht was born on January 9, 1944, in Detroit, Michigan. He died unexpectedly on Wednesday, June 8, 2022. Wayne is survived by his loving wife, Jane, daughters, Sara (Mike) Rymar, Renee Heigel (Matt Sweeney), grandchildren, Manny and Emma, sister Sharon (Ed) Knight, many loved cousins, nieces, nephews, and beloved dog, Patches. He was preceded in death by parents Martha and Frank Kracht and brother, Paul. Besides Wayne’s family, his biggest pride was being a native Muskrat and part of the Algonac Community and camaraderie that went along with living in the area. He grew up on the St. Clair River, in the Pearl Beach area; later moving to Flamingo Rd. in 1979. He lived his younger days with his family and friends enjoying boating, swimming, fishing, waterskiing, spending time in the infamous boathouse; among so many other memories. Wayne continued his interest in skeet shooting, a family pastime, and spent time at the gun range. He proved to be a natural born marksman which would later guide his path in the military. He attended Algonac High School and graduated in 1962. He thrived in many sports including baseball, track, football, and hockey. Wayne was the captain of the Algonac football team, captain of the hockey team, as well as manager of the little league hockey team. He continued to play hockey and ice skate throughout his life, was an avid fan of the Detroit Tigers and most of all, the Detroit Red Wings. Wayne shared his love of the ice and many sports with his family. He was a leader and a mentor to many friends and family members. Wayne was drafted into the US Army in November, 1966. During his training period he was platoon leader and also was awarded a trophy for marksmanship for highest honors in his company. He served in the Vietnam War, was wounded in the line of duty on August 21, 1967 and was awarded the Purple Heart. He was a highly decorated soldier, earning many medals, including the Bronze Star for his heroic service. Wayne achieved a rank of Private First Class in the Infantry division and was honorably discharged on September 10, 1968. Wayne had a great interest in cars and boats, which increased as he worked at Bell Harbor Marina. He later worked as a manager at furniture store, Michigan Rustic, with his brother Paul, that their father, Frank, started. He moved on as a Manufacturer's Representative for UGL, forming many friendships and retiring after a rewarding career. He married his beloved wife, Jane, on June 25, 1988 in their beautiful backyard facing the river he loved so much. He and Coco (his treasured dog) welcomed Jane, Sara and Renee into his life and shared all of his interests with them while living on the canal off the North Channel. He and Jane continued to enjoy life on Flamingo Rd. with their dear children and grandchildren and so many loved family members, close friends and neighbors. It was such a thrill for Wayne and Jane to spend time visiting with those they cared about so much while on their deck and boat. Wayne was a bright light in the lives of his family and many others. His charisma was contagious; he loved people and they loved him. So many have shared that Wayne had a positive influence in their lives. Wayne and Jane got so much joy by supporting their adored grandchildren and much-loved nieces and nephews at their many extra-curricular events. Wayne cheered the loudest and rarely missed their events, especially Manny’s baseball and soccer games. One of his last days on earth was spent watching Manny be the MVP at his All Star baseball game! His shine had been dimmed in the last few years while dealing with pain in his body due to many health issues and effects from injuries he sustained in Vietnam. Family and friends helped to keep his light bright. Wayne and Jane took great care of each other and their love was powerful. Throughout the years, he used many healthy and proactive ways to try and heal his body from pain so he could continue to enjoy life to the fullest keeping the wind in his hair on his boat, the Lady Jane. His light will shine on in those whose lives he has touched. Visitation will be on Friday, June 24, 2022 from 12:30 p.m. until 3:00 p.m. and 4:30 p.m. until 7:00 p.m. at the Wasik Funeral Home-Gendernalik Chapel, 35259 23 Mile Rd., New Baltimore. Funeral service for Wayne will be on Saturday, June 25, 2022 at 11:00 a.m. at the funeral home. Military honors following the funeral service. Memorials may be made to the DAV (Disabled American Veterans), 477 Michigan Avenue #1200, Detroit, MI 48226 or to the Paralyzed Veterans of America, 801 18th Street NW, Washington, DC 20006-3317.

The family of Wayne R. Kracht created this Life Tributes page to make it easy to share your memories.

Send flowers to the Kracht family.