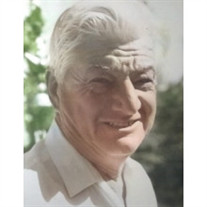 It is with deep sadness that the Vernier family announce the passing of Warren B. Vernier, who died peacefully on August 25, 2021 at Henry Ford Hospital in Clinton Township, Michigan. He was born in Grosse Pointe on November 5, 1922 to the late Clarence and Gladys (Champine) Vernier. He is survived by his loving wife, Thelma, brother, Clarence, children, Daniel (Susanne, deceased), Paul, Leslie (William) Grodzki, and David, as well as his 3 stepchildren and their spouses. He also leaves behind many grandchildren and great grandchildren. Warren lived a long, full life, and passed away at the age of 98. He was a gifted man of many talents. As a boy, Warren taught himself how to read music and, by watching the keys of a player piano, learned how to play! He was able to play both the piano and organ by ear, entertaining many with requests for their favorite songs, along with his favorites of the 40's Big Band Era. Warren also loved to sing and dance. An avid golfer, he played very well for many years and was very proud of his hole in one! Having a quick wit and ready smile, he was also a great story teller! Warren graduated from Lakeshore High School, where he enjoyed playing basketball on their team. He proudly served his country in World War II in the Army Air Corps having trained for skills in Aircraft Turret Maintenance on the B-24 Bomber, and received an honorable discharge with the rank of Corporal in 1945. After returning from the war, Warren married Phyllis L. Boucher (now deceased), and settled in St. Clair Shores, Michigan to raise his family. Warren retired as Fire Chief of the St. Clair Shores Fire Department. He worked his way up through the ranks and retired after 30 years of service. Warren also owned a landscaping company in the 1950s and 1960s and he, along with his two eldest sons, took care of many lawns of the big names in the auto industry in the Grosse Pointe area. Warren married Thelma Eppinga in October, 1986, and brought much joy to his extended family. Warren and Thelma enjoyed many years of traveling and cruises, also attending reunions in Europe with his World War II Veterans group. They spent most winters in Florida at their home in Palmetto, where he enjoyed entertaining family and friends. Warren was a wonderful man and a true gentleman and will be greatly missed by all who knew and loved him. Memorial Service at 11:00 a.m. on October 9, 2021 at Lakeshore Presbyterian Church, 27801 Jefferson Avenue, St. Clair Shores. In lieu of flowers, donations can be made to Samaritan's Purse or your choice of charity.

It is with deep sadness that the Vernier family announce the passing of Warren B. Vernier, who died peacefully on August 25, 2021 at Henry Ford Hospital in Clinton Township, Michigan. He was born in Grosse Pointe on November 5, 1922 to the... View Obituary & Service Information

The family of Warren B. Vernier created this Life Tributes page to make it easy to share your memories.

It is with deep sadness that the Vernier family announce the...

Send flowers to the Vernier family.