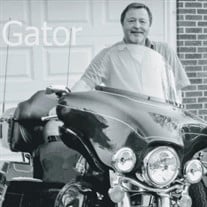 In loving memory of Vernon Edward Mathews, age 70, who went to his heavenly home on December 8, 2021. Born to Harold Franklin and Verna Florence Mathews of Leesburg, Fl. Vernon grew up on his parents’ cattle ranch in central Florida, and was talented at mechanics and electronics, putting together and repairing many motorcycles, cars, farm equipment and TVs. Vernon also worked at Mom & Dad’s Pizza Pantry, owned by Adrian Logsdon. Because of this affiliation he met his wife-to-be while she was on vacation in 1969 visiting her Uncle Adrian and family. He joined the military and proudly served, finishing as a Sergeant in the US Marine Corp (1970-1976). Vern happily married Regina Louise Fitch on September 30, 1972, at Holy Innocents Catholic Church. They were married for 49 years, mostly living in Roseville, Mi. Vernon adored his wife and made God and his family the center of his universe. After his discharge, he studied and became an electronics technician, working at General Dynamics. Later, Vernon retired from Pioneer Plastics as the jack of all trades plant manager. Mr. Mathews was a cub scout leader, catechism teacher, drummer turned piper then Pipe Major with the 42nd Highlanders, and mentor to many musicians. He enjoyed singing with family (Jim Fitch and Lew Logsdon) in the Schwäbischer Männerchor, serenading his neighbors while practicing his bagpipes, and riding as a member of the Southern Cruisers R/C. Above all else, Mr. Mathews lived by the golden rule, helping anyone he could by mowing lawns, taking care of snow removal, and many other helpful tasks for family and friends. If you met him in line at the store, he would find some way to cheer you up and make you laugh with his easy-going nature. Vernon was preceded in death by his parents. He is survived by his beloved wife, his dearly loved siblings William (Johnna), John Paul (Pamela), Marilyn, and Merline Sanders; his loved children Vernon Anson (Tammy), Marria (Timothy) Taylor, and Nathaniel (Stacie); and cherished grandchildren Vernon John, Shaelie, Collin, Ally, Enda and Isla. A Mass Intention for Vern will be at 10:30am on March 13th, 2022 at Holy Innocents Catholic Church in Roseville. The Celebration of Life will be held at the American Legion Post 4 on the same day. In lieu of flowers memorial contributions to the American Legion Post 4 are preferred and appreciated.

In loving memory of Vernon Edward Mathews, age 70, who went to his heavenly home on December 8, 2021. Born to Harold Franklin and Verna Florence Mathews of Leesburg, Fl. Vernon grew up on his parents&#8217; cattle ranch in central Florida,... View Obituary & Service Information

The family of Vernon Edward Mathews created this Life Tributes page to make it easy to share your memories.

In loving memory of Vernon Edward Mathews, age 70, who went to...

Send flowers to the Mathews family.