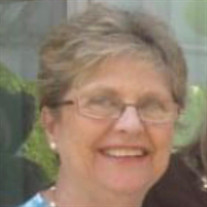 Theresa Camilla Rogers of Shelby Township passed away on December 17, 2020. She was born and raised in Detroit, Michigan. Theresa was the youngest of 4 children born on September 15, 1936 to Polish immigrants, the late John and Camilla (nee Juchniewicz) Kluczynski. After graduating from St. Stanislaus in 1954, she became a licensed beautician. Soon after, she married Joe Rogers and made their home in Warren, Michigan, while raising 3 daughters Julie, Gail and Kathy. Theresa worked part time for many years in a beauty salon. She enjoyed life, and could always be counted on to lend a helping hand to family and friends whenever needed. Theresa loved taking classes with her friends and had a talent for arts and crafts, sewing and cooking. Theresa and Joe loved to travel and spent many years touring the country. Through their many travels, they explored the United States from California to Boston and other places around the world including Spain, Poland and Africa. When Theresa retired at the age of 59, she and Joe moved to Shelby Township near close friends while making new friends. Her and Joe would spend winters in Florida, but only for a short time until Joe became to ill to travel. Following Joe’s passing in 2006, Theresa found comfort and happiness being with family and friends. She enjoyed exercising, including Tai Chi, going out to eat, senior outings and church activities. Theresa was the wife of the late Joe Rogers. Mother of Julie (Michael) Harms, Gail Rogers and Kathy (Robert) Wilkins. Grandmother of Melissa (Bryan) Vasquez, Elizabeth (Keith) Kochajda, Nathan and Lucas Wilkins. Great grandmother of Anthony, Autumn, Kyle, Travis, Finley and Leland. Theresa was predeceased by her siblings; Irene Wichowski, Vitold Kluczynski and Clara Bonczek. Theresa’s family will have a private memorial service at St. Therese of Lisieux at a later date. Interment at Resurrection Cemetery.

Theresa Camilla Rogers of Shelby Township passed away on December 17, 2020. She was born and raised in Detroit, Michigan. Theresa was the youngest of 4 children born on September 15, 1936 to Polish immigrants, the late John and Camilla (nee... View Obituary & Service Information

The family of Theresa Camilla Rogers created this Life Tributes page to make it easy to share your memories.

Theresa Camilla Rogers of Shelby Township passed away on December...

Send flowers to the Rogers family.