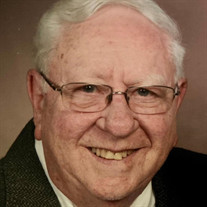 Terry Lee Walter was born on October 14, 1942, in Gary Indiana and was the only child to Leonard and Earlaine (Shork) Walter. After graduating from Anchor Bay High School in 1960 he attended college at Saint Leo University in Saint Leo, Florida. After coming back to Michigan Terry met, dated, and married his beloved wife Shirley Ann (Ringel) Walter on June 20, 1964, at St. Mary Catholic Church in New Baltimore, Michigan. Together Terry and Shirley celebrated 57 years of marriage. Terry and Shirley welcomed their eldest son, Kevin Joseph Walter on November 14, 1965, and their youngest son, Todd Edward Walter on January 3, 1967. Terry was a wonderful, supportive father, always active in what his boys showed interest in including traveling, coaching sports, fishing, hunting, etc. Terry’s strong work ethic also carried through to his family. Terry was also a loving, caring father in-law to Cindy (Ciokajlo) Walter and grandfather to Natalia Jo and Michael Todd Walter. Terry was very proud of his family and always excited to hear and share about their accomplishments and lend an ear or financial gift. Terry was so thrilled that both his grandchildren earned a college degree as he often wore items from Grand Valley State University. Terry enjoyed other hobbies including making homemade wines, searching for treasures with his metal detector and anything to do with Scottish music, science, archeology, rock, and gems. Terry had a wonderful collection of various rocks including a vast array of Native American arrow heads. Terry was an active member of the St. Mary Catholic Church for over 50 years and a member of the Knights of Columbus for over 40 years. Terry spent his professional career as a Precision Tool and Die Inspector and was always proud he played a part in putting a man on the moon. After retiring in 2004, Terry continued to fill his time attending rock and gem shows and more seriously took up baking and cooking. He will be remembered by many people for the wonderful, delicious treats he produced, many without ever following a recipe. Terry was always ready to bake and give away his goodies and assisted in the St. Mary’s Catholic Church Lenten Fish Frys, Morning McCrest program and occasionally dropping off treats for the Parish Center. For those who really knew Terry he will be greatly missed for his humor, kindness, and extreme generosity whether it be a bag of homemade cookies or a $10.00 bill to fill your gas tank after a weekend visit. Terry passed away peacefully at his residence at The Villages of East Harbor on Wednesday, June 1, 2022, under the care of Heart-to-Heart Hospice and with his family at his bedside. Per Terry’s wishes, he has been cremated. A private gathering for his ashes to be interned at St. Mary Catholic Cemetery. A celebration of celebration of his life will be held on Saturday, July 16th at the VFW Hall in New Baltimore during the hours of 3:00-5:00 pm. May the road rise up to meet you, May the wind be always at your back, May the sun shine warm upon your face, The rains fall soft upon your fields, And, until we meet again, May God hold you in the palm of His hands. -Irish Blessing

Terry Lee Walter was born on October 14, 1942, in Gary Indiana and was the only child to Leonard and Earlaine (Shork) Walter. After graduating from Anchor Bay High School in 1960 he attended college at Saint Leo University in Saint Leo, Florida.... View Obituary & Service Information

The family of Terry Lee Walter created this Life Tributes page to make it easy to share your memories.

Send flowers to the Walter family.