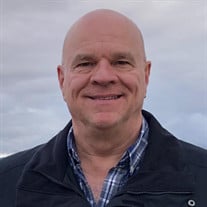 Steven M. Sparrow, of Warren, passed away Tuesday, April 14, 2020, at the age of 55. He was born August 29, 1964 in Berrien County, Michigan to the late William and Carol Sparrow. Beloved husband of Shannon. Dearest father of Courtney (Brandan) Van Note, Amanda (John) Darga, Samantha (Andrew Metzger) Sparrow, Nathan Breton, and Katelyn Breton. Loving grandfather of Madelynn, Travis, Atom, and Mia. Dear brother of Brenda (Gary) Venema and William (Janice) Sparrow. Steven was a loving husband, dad, and papa. He cherished spending time with his family and putting smiles on people's faces; to him, laughter was the best medicine. He enjoyed goofing around, playing practical jokes, and always looked forward to the first prank of the day on April Fool's. Steven had a passion for his job and took a lot of pride in it; working in the telecommunications field, he was quite tech savvy, excelling in phone systems, cabling, and networking. Away from work, he was a huge sports fan; having grown up on the west side of the state, he cheered for the Chicago Cubs and Bears, but also his hometown Detroit teams, and especially University of Michigan football. Another love of his was spending time with his love, Shannon, going on adventures and scavenger hunts and taking pictures. As they were both avid photographers, they would enjoy taking in nature, landscaping, and scenery, and being able to share a hobby together. He will be very dearly missed by all. Funeral services will be private. Having served his country faithfully and honorably as a member of the United States Marine Corps, Steven will receive military honors and be interred at Great Lakes National Cemetery.

Steven M. Sparrow, of Warren, passed away Tuesday, April 14, 2020, at the age of 55. He was born August 29, 1964 in Berrien County, Michigan to the late William and Carol Sparrow. Beloved husband of Shannon. Dearest father of Courtney (Brandan)... View Obituary & Service Information

The family of Steven M. Sparrow created this Life Tributes page to make it easy to share your memories.