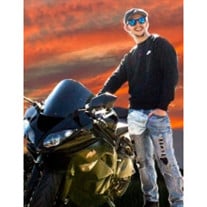 Steven Michael Rose was born on June 8, 2001 in Monroe, Michigan. The family moved to the Anchor Bay area when Steven was 3 years old. There are no academic achievements to mention as school was just not his thing. Steven's school was the school of life, which he excelled at with more passion than most. He was a young man with an old soul, he loved his family and friends with great intensity. Steven's others loves included motorcycles, fast cars, and guns. His passion for anything with a motor led him to his profession as a Mechanic Apprentice at Matick Toyota. Steven's "hard" exterior with his determination and strong will meant he stood his ground, always and never backed down from anything, he lived his life a quarter mile at a time. If he wanted something, he figured out how to get it and worked hard for whatever it was. He always had the backs of all his loved ones, no matter what the circumstance. The softer side of Steven was his kindness and compassion and his love of children, he was one that wore his heart on his sleeve. Steven loved life and the people in his life. His mischievous smile and his caring eyes would brighten anyone's day. There was no staying angry with Steven, and he knew it. All he had to do was flash one of his million dollar smiles, and all was forgiven and forgotten. May 20, 2021 was a day that our lives changed forever. There would be no more of the smiles, the craziness, the fun times on the bikes, the hanging out with friends. At the young age of 19, Steven left our lives. All of us that knew him will never be the same, there will be a hole in all of our hearts as he touched so many of us in that special Steven way. Steven was predeceased by his Great Grandmother, Della Rose Fugate who now will be with him again. Steven leaves behind his Mother, Crystal Marie Fugate, Brothers, Dylan (Maddie) Erving and Devon Rose, loving girlfriend Serina Veguilla, Grandparents, Deborah (Calvin Stump), LB, Uncles and Aunts, Bobby (April) Govan, Calvin (Martha) Stump, Peggy, Dustin (Sheila) Brown, Derek Brown, Lisa (Mark) Workens, Diane (Paul) Cag, Pamela (Jim) Demeulenaere, Jen (Brent) Perkins, and many cousins and brothers from another mother, NOT BY BLOOD BUT BY CHOICE, Mikey (Sam) Armstrong and Trent Perry, his fur babies Loaki and Wheeler and his favorite dog Charlie who was already gone greeted Steven when he arrived. Steven will never be forgotten and will be missed dearly. "Steven Michael Rose", you are our shooting star! Visitation 12:00 p.m. to 4:00 p.m. on Saturday, May 29, 2021 at Gendernalik Funeral Home, 35259-23 Mile Road, New Baltimore.

Steven Michael Rose was born on June 8, 2001 in Monroe, Michigan. The family moved to the Anchor Bay area when Steven was 3 years old. There are no academic achievements to mention as school was just not his thing. Steven's school was the school... View Obituary & Service Information

The family of Steven Michael Rose created this Life Tributes page to make it easy to share your memories.

Send flowers to the Rose family.