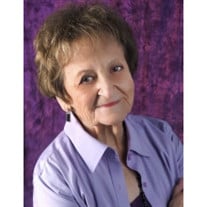 Shirley C. Croskey passed away on January 3, 2022, one day short of her 94th birthday, in Detroit. She was born on January 4, 1928 to Lewis and Sarah A. (Fodor) Lobel in Detroit. Beloved wife of the late Anthony Philip Croskey. Loving and devoted mother of Kathleen Hamilton, Annette (Robert) Zivkovic, Patrick (Jane) Croskey and Mary Jane (Richard) Williams. Loving and proud grandmother of Christopher (Meghann Murray) Hamilton, Rick (Tori) Williams, Sara Williams, Stephanie Zivkovic, Nicholas Zivkovic, Ryan Croskey, Logan Croskey and Alaina Croskey. Proud great grandmother of Harper Hamilton, Presley Williams, Brice Williams and Sadie Williams. Beloved aunt and godmother to many. An accomplished dancer from an early age, as well as a violinist and brilliant student, Shirley graduated early from Detroit's East Commerce High School and began working as a secretary for the Detroit Public Schools, as well as a dance teacher at the Macabees Building. After raising her family, she put her administrative skills to work as a devoted volunteer to Catholic Social Services in Utica, and also volunteered regularly at Motown Soup, St. Thecla Catholic Church in Clinton Township, and St. Vincent DePaul Society in Cape Coral, Florida, where she spent many winters. Shortly after marrying (Tony) Phil Croskey, the couple moved to Chesterfield Township, where they built their own house, raised their children, and were active in St. Mary Queen of Creation parish. Ever a good sport, Shirley endlessly entertained and travelled aboard their sailboats, fighting off seasickness. In addition to such good nature, she was widely appreciated for her kindness, support to friends and family, and deep spiritual belief. She resided for three decades in the Charter Oaks community of Clinton Township and recently moved to assisted living in Grosse Pointe Woods. She passed away painlessly and peacefully after a short hospital stay. A memorial service is being planned for later this year. In lieu of flowers, the family asks that donations be made to St. Thecla Catholic Church (20762 S. Nunneley Rd., Clinton Township, MI 48035) or Motown Soup (45160 Van Dyke, Utica, MI 48317 or http://motownsoup.com).

Shirley C. Croskey passed away on January 3, 2022, one day short of her 94th birthday, in Detroit. She was born on January 4, 1928 to Lewis and Sarah A. (Fodor) Lobel in Detroit. Beloved wife of the late Anthony Philip Croskey. Loving and devoted... View Obituary & Service Information

The family of Shirley Catherine Croskey created this Life Tributes page to make it easy to share your memories.

Send flowers to the Croskey family.