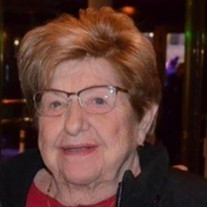 Sabina Patricia Roeske (Nee Szajgecki), 84, of New Baltimore, sadly left us on June 10, 2022. Known as “Bea” by many, she was predeceased by her husband of 49 years, Donald (2010). Sabina is survived by her three sons, Dan (Tish), Ken (Jane) and Rick (Michele). A funeral mass will be held in her honor at 10:30 AM on Wednesday, June 15, 2022, at St. Mary Queen of Creation Catholic Church in New Baltimore, MI. The importance of family was not lost on Sabina, and she loved spending time with her grandchildren, Max, Madeline, Maren, Mallory, Jenna, Nathan and Beka. Whether baking Christmas cookies with them, taking them shopping, preparing their favorite foods or listening to their stories, she was proud of each of them and loved them dearly. Sabina was the youngest of seven, and as a first generation American, was proud of her Polish heritage. She attended St. Thomas the Apostle school and graduated from Patronage of St. Joseph in Detroit. While in high school, Sabina worked at Sanders on Woodward and many years later was still able to identify a chocolate filling based on the swirl on the top of the candy. She and her husband raised their sons in Warren, and in 1991 they moved to New Baltimore. Bea worked on early computers as a key punch operator at Detroit Edison. After raising her sons, she went back to work and retired from General Dynamics Land Systems where she was a reprographics technician. This interest in technology stayed with Sabina and her grandchildren thought that it was “awesome” that grandma had an I-phone, I-pad, and both laptop and desktop computers and was active on social media. In lieu of flowers, the family respectfully suggest contributions may be made in Sabina Roeske's memory to The Solanus Casey Center in Detroit.

The family of Sabina P. Roeske created this Life Tributes page to make it easy to share your memories.

Send flowers to the Roeske family.