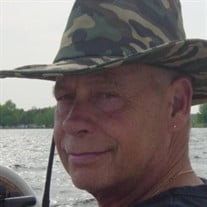 Russell Warren Blumke, 72, of Macomb Township, was born in Detroit, Michigan to Harold and Evelyn Blumke on February 15, 1949. He entered eternal life on December 18, 2021. He is preceded in death by his father Harold, his stepfather Gustave Bishop, his mother Evelyn, and by his brothers Wayne Bishop and Dennis Blumke. Russ is survived by his wife of forty-three years Karen Blumke, his brothers Larry (Terri) Blumke and Gregg Bishop, his children Russell (Joli) Blumke II, Steven (Keri) Blumke, Matthew Blumke, Ryan (Amy) Blumke, and Lauren Blumke. He was a proud grandfather to fifteen grandchildren, Jessica, Shannon, Russell III, Ashley Mae, Travis, Tyler, Kyle, Olivia, Brandon, Andrew, Benjamin, Sarah, Jonathan, Madelyn, and Alex, and four great grandchildren. Russ is further survived by many nieces and nephews including his God children Mark Blumke, Kevin Wood and Tracey Smith, and by his dear cousin Lodi White. Russ was drafted to the Infantry Division of the US Army in February 1969 and completed Student NCO Candidate training in Fort Benning, Georgia. He was deployed with the 101st Airborne Division and fought in Vietnam from March until May 1970 as a heavy machine gun operator in the DMZ where he suffered injuries from rocket grenade shrapnel in the course of heavy fighting during combat on May 23, 1970. He recovered and was stationed at Fort Knox, Kentucky and began work at the rank of E5 as drill sergeant with the Basic Combat Training unit. Russ was honorably discharged on April 6, 1971. Among his Decorations, Russ received the National Defense Service Medal, Vietnam Service Medal, Vietnam Campaign Medal, and Purple Heart. Russ was a proud US Army veteran who loved God, Country, and family, and was a member of the Fraternal Order of Eagles in Albright Shores, Michigan, as well as the VFW in Shelby Township, Michigan along with his brother Dennis. Russ was a delighted supporter of Tunnels to Towers and the Fraternal Order of Police. Russ retired from Chrysler after 37 years of dedication, working most recently as a transmission and driveline research and development technician at the Tech Center in Auburn Hills, Michigan. During his time working at Chrysler, he began working on the assembly line at the Lynch Road plant, from there he went to the Highland Park plant as an emissions technician. During the 1980 layoffs, he began work at the Detroit Fire Department as a fleet mechanic before returning to Chrysler in the transmission lab. Russ loved his cottage and property located in Beaverton, Michigan, where he could be found cutting grass, cleaning gutters, trimming trees, cleaning windows and boats, and maintaining a fleet of watercraft for use on his beloved Wixom Lake, at least until 2 o’clock, affectionately known as “pontoon o’clock”. Visitation will be held on Wednesday, December 29, 2021, at 2PM until 8PM at Wasik Funeral Home, 49150 Schoenherr, Shelby Township. Viewing from 10AM until funeral services on Thursday, December 30, at 11 AM at Faith Lutheran Church, 37635 Dequindre Rd, Troy, MI. Interment with military honors at Great Lakes National Cemetery. In lieu of flowers, donations can be made to the Faith Youth program at Faith Lutheran Church. https://faithtroy.churchcenter.com/giving/to/yf-youth-fund

Russell Warren Blumke, 72, of Macomb Township, was born in Detroit, Michigan to Harold and Evelyn Blumke on February 15, 1949. He entered eternal life on December 18, 2021. He is preceded in death by his father Harold, his stepfather Gustave... View Obituary & Service Information

The family of Russell Warren Blumke created this Life Tributes page to make it easy to share your memories.

Russell Warren Blumke, 72, of Macomb Township, was born in Detroit,...

Send flowers to the Blumke family.