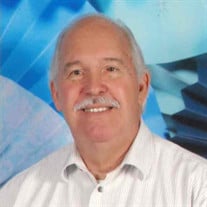 Robert A. Straka was born on August 21, 1944 in Detroit to Andrew and Irma Straka. He passed away at his home in Sterling Heights on May 3, 2022 at the age of 77. Robert proudly served his country in the United States Army during the Vietnam war and being honorably discharged in in 1967 earning the rank of Spec 5 and earning the National Defense Service Medal, Combat Infantry Badge, Vietnam Service Medal, Good Conduct Medal, the Marksmanship Medal on the M14 as well as the Purple Heart for injuries sustained in connection with military operation against a hostile force. When Bob's service to his country was complete he took a position with General Motors where he had a position as a special clerk and was active with the UAM until his retirement. Bob met his wife Trudy at his position at General Motors and they built their lives together settling in Sterling Heights. In his off time Bob loved spending time at their place up north and was an avid hunter spending many outings across Michigan and the North American continent as well as hunting larger game in the plains of Africa. Bob also had a passion for horses owning several throughout the years and racing them regularly at the local (and some not so local) horse tracks. Bob and Trudy were avid travelers spending many vacations on the high seas on-board whatever cruise liner that was traveling to their destination. Above all else Bob was a likable guy who could strike up a conversation with anyone and would often do this anywhere...he never met a stranger. Bob is survived by his beloved wife of 43 years Trudy. He is further survived by his son Robert (Beata) Straka. His sister Linda (the late Fred Marsh and the late Tom Bushre) Bushre, his nephews Scott (Juliana) Marsh and th elate Brian Marsh and his cousin Jackie Straka. Visitation Sunday 2-8 PM at the Wasik Funeral Home, Inc. 49150 Schoenherr Rd. (n. of 22 Mile Rd.), Shelby Twp. Funeral service Monday 11 AM at the funeral home. Interment with military honors immediately following the funeral services at Cadillac Memorial Gardens East Cemetery in Clinton Township. Memorial contributions, in Bob's memory, may be directed to the Humane Society of Macomb 11350 22 Mile Road, Shelby Township, MI 48317.

Robert A. Straka was born on August 21, 1944 in Detroit to Andrew and Irma Straka. He passed away at his home in Sterling Heights on May 3, 2022 at the age of 77. Robert proudly served his country in the United States Army during the Vietnam... View Obituary & Service Information

The family of Robert A. Straka created this Life Tributes page to make it easy to share your memories.

Send flowers to the Straka family.