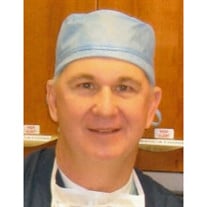 Grosse Pointe Farms resident Robert Louis Shovan, 67, passed away Friday, April 30, 2021, due to complications from COVID-19. Born July 11, 1954, to Mary Katherine (nee Bunn) and Louis William "Bud" Shovan in Mount Clemens, he grew up in Algonac. A 1972 graduate of Algonac Community High School, Robert was on the wrestling team and enjoyed fishing, sailing and boating. After he graduated high school, Robert worked the afternoon shift in a factory full time and attended nursing school during the day. He graduated from St. Clair Community College in 1980. He began his nursing career at University Hospital in Ann Arbor, where he worked in the critical care unit from 1980 to 1984. He then attended the Cleveland Clinic Graduate School of Anesthesia, from which he graduated in 1986, and returned to Michigan. A nurse anesthetist 35 years, Robert worked at many medical offices and hospitals during his career. He finished his career at Henry Ford Hospital, West Bloomfield, where he was one of the original nurse anesthetists when the hospital opened and always laughed, joked and bantered with the staff. Robert had a passion for shooting sporting clays - especially FITASC, an international form of sporting clays - in which he competed locally and nationally. His accomplishments included master class, shooting a perfect 100 straight in a registered event, shooting more than 100,000 registered targets and winning the first American Field Sporting event at Eagle's Nest in Ohio. He also enjoyed riding his motorcycle, bicycling and boating. Robert was a member of the American Association of Nurse Anesthetists, National Sporting Clay Association, National Rifle Association and Republican Committee.Robert is survived by his life companion, LuAnn, and dear brother, Larry (Linda). He was the loving uncle of Lisa and Lora. Memorial visitation takes place from 4 to 8 p.m. Friday, May 21, at Gendernalik Funeral Home, 35259 23 Mile Road, New Baltimore.

The family of Robert Louis Shovan created this Life Tributes page to make it easy to share your memories.

Send flowers to the Shovan family.