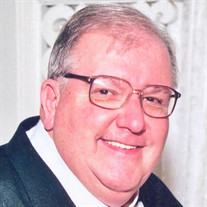 Robert John “Bob” Pylar, 78, of St. Clair Shores, MI peacefully passed away on Sunday March 21, 2021 at Henry Ford Macomb Hospital in the presence of his family. He was born on March 6, 1943 to Raymond and Leona (nee Konke) Pylar in Detroit, MI and attended St. Joseph High School in Detroit, Class of ’61. He married Mary Margaret Hafeli in 1966 and raised three children - Robert Mark, Donna Marie (Ray) Hollingsworth and Laura Maureen (Brian) Myers during their 49 years together. He spent 29 years with General Motors Photographic Division and concluded his career with Electronic Data Systems (EDS). His passions included spending time with his family and friends, and donating his time to various causes including the St. Margaret Men’s Club, of which he was a past-President. He was active in civic organizations as a member of the City of St. Clair Shores Parks and Recreation Committee and the City of St. Clair Shores Activities Committee. He enjoyed a variety of sports and games, particularly golf, CYO and high school basketball and his standing poker matches with friends. He is preceded in death by his parents, and his wife. He is survived by his sister, Judy (Robert) Billbury as well as his children and grandchildren, Willow, Noah and Lily. He is also survived by his nephew, Dean (Tammy) Billbury and nieces, Sandy (John) Heiza, Sheri Hafeli, Karen (Jeffrey) Breza, Kathy (Steven) Randlett and Julie (Carl) Garbarino. He also leaves behind a great number of beautiful friends and magnificent memories. A Funeral Mass will be held Friday at 10:30 AM with Reverend Ronald DeHondt officiating at St. Margaret of Scotland Catholic Church, 21201 E. 13 Mile Rd. in St. Clair Shores. In lieu of flowers, memorial donations may be made in Bob’s name to St. Jude Children’s Research Hospital, 262 Danny Thomas Pl, Memphis, TN 38105 or www.stjude.org or to St. Margaret of Scotland Catholic Church.

The family of Robert "Bob" Pylar created this Life Tributes page to make it easy to share your memories.

Send flowers to the Pylar family.