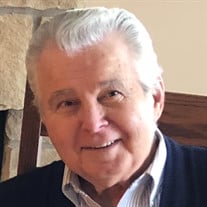 Robert Alex Kaminski, of Warren, passed away peacefully surrounded by his loving family after a 2 month courageous and well fought battle with cancer on October 1, 2020 at the age of 79. He was born January 5, 1941 in Pontiac, Michigan to Paul and Irene (nee Kasperski) Kaminski. Bob was a hard worker. As a young man he enjoyed working at Highland Appliance and later at VPA retiring at the age of 76. He met a lot of people along the way and cherished the friendships he made throughout the years. Bob also enjoyed spending time outdoors and took great pride in keeping his garden looking beautiful. Bob's greatest joy in life was his family. His girls were his world. From family dinners to just casual gatherings his most happiest of times were just being with his wife, Barb, three daughters and their families. Many memories were also made through the years with his grandchildren. Those memories along with an amazing legacy will live on and be cherished by his entire family. He was a protective dad to his girls and family right up until the end. His gentle touch and caring heart will truly be missed not just by his family but all those who knew and loved him. Beloved husband of Barbara for 57 years. Loving dad of Julie (Leo) Sullivan, Vickie Denny and Kathy (Michael) Powers. Proud grandpa of Leo and Megan Sullivan; Matthew, Courtney, Catherine, Adam, Alexis and Robert Denny; Michael and Marisa Powers and great grandpa of Layken Denny. Dear brother of Betty (Dave) Wickman, Ronald Kaminski and brother in law of Larry (Janet) Gniatczyk. Adored uncle of Katelyn Wickman, Laura (Dave) Byars, Jeff (Kara) Gniatczyk and Jonathan (Leslie) Gniatczyk. Also survived by many loving great nieces and great nephews. Family and friends will gather Friday (October 9th) at 11:30 a.m. until time of Funeral Mass 12 noon at St. Martin de Porres Catholic Church, 37111 Hoover Road (north of 13 Mile Road) Warren. Interment Resurrection Cemetery, Clinton Township.

Robert Alex Kaminski, of Warren, passed away peacefully surrounded by his loving family after a 2 month courageous and well fought battle with cancer on October 1, 2020 at the age of 79. He was born January 5, 1941 in Pontiac, Michigan to Paul... View Obituary & Service Information

The family of Robert Alex Kaminski created this Life Tributes page to make it easy to share your memories.

Send flowers to the Kaminski family.