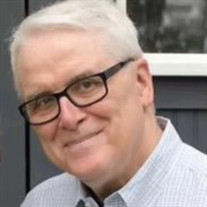 Beloved husband of Mary Ann. Loving father of Mary Beth (Steve Deitz) Hribar, Michelle (John Holm) Hribar, Kathy (Tom Pate) Hribar, Carrie (Paul Bissa) Hribar. Proud grandfather of Elizabeth, Lucy, Charlie, Anna Mary, and Benjamin. Dear brother of the late David (Dawn) Hribar. Funeral services will remain private but will be livestreamed at the funeral home website starting at 10 AM Monday. Bob was born in Highland Park and raised in East Detroit, Michigan. He was a graduate of East Detroit High School, attended college at the University of Detroit, and received his Juris Doctorate from University of Detroit Law School in 1966. Bob was a member of the State Bar of Michigan for over 50 years, served as City Attorney for the City of Eastpointe for 36 years, and maintained a private practice first in Eastpointe and later in Clinton Township. He was active in the Macomb County Bar Association and served a term as President in 1981. He was a well-respected attorney, often regarded for his ethics and legal knowledge. Bob was an avid sports fan and his favorite pastime was attending sporting events. He held University of Michigan Football season tickets for over 40 years, and for many seasons attended all home and away games. He also loved the Detroit Tigers and Premiere League Soccer. Bob was an active member at St. Veronica Parish in Eastpointe and later at St. Paul of Tarsus in Clinton Township. His Catholic faith shaped his views of the law and social justice and his commitment to improving the community and leading by example. Bob’s biggest joy and pride in life was his family. He considered himself blessed to have married his wife Mary Ann in 1968 and to be the father of his four daughters. He also adored his sons-in-law and grandchildren. The family enjoyed traveling together and those experiences created lifelong memories. He loved to share with others his pride of his family and their accomplishments. In lieu of flowers, the family asks that you honor Bob with a donation to the Capuchin Soup Kitchen.

The family of Robert J. Hribar Jr created this Life Tributes page to make it easy to share your memories.

Send flowers to the Hribar family.