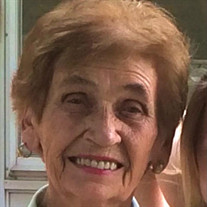 Rita Constance Stevens (nee Kapuscinski) was born July 1, 1930 to Theodore, a Detroit Police Officer and Genevieve (nee Dombrowski) Kapuscinski, a dance instructor and seamstress in Detroit, Michigan. She was the second born child behind her older brother Thaddeus (“Ted”). The Family had its beginnings in the Detroit’s “Poletown” area on the lower east-side on Grandy Street. Rita was baptized at Poletown’s Immaculate Conception parish August 3, 1930. A few years later, the family settled near Van Dyke at Outer Drive, one of the early families that built Our Lady Queen of Heaven Parish. Rita attended Our Lady Queen of Heaven Parish and grade school with her brother Ted. She graduated from Dominican High School receiving her diploma on June 8, 1947. She was involved with music, choir, theatre, and also played on the cathedral girls basketball team. After graduation, Rita attended Marygrove College, class of 1951, earning her Bachelor of Music Degree with highest honors in 1951. In her younger years she enjoyed her friends and family life—particularly traveling with her brother Ted’s Major League Baseball career with the Detroit Tigers in the early 1950’. She also enjoyed her summer in the mid 1950’s traveling all over Europe. In the 1960s, Rita met fellow teacher Thomas Stevens and they married at Our Lady Queen of Heaven Church on July 27, 1967. Their only son Todd was born June 22, 1968 and they build their home in 1970 in Harrison Twp, MI, parishioners at St. Hubert Church. Rita was an educator for the Detroit Public Schools for 36 years teaching music to high school students and teaching kindergarten. She received numerous merit awards, commendations, and outstanding recognition for accomplishments in both music and early childhood/kindergarten education. She also received awards through extracurricular involvement in music organizations, associations, and regional events. Well-known, liked, and respected for her abilities, she was asked by producers and directors on Broadway in New York City to compose music and orchestration arrangements, but she chose to continue teaching and live in Detroit to be with her family. She taught at several schools on Detroit’s east side, with most of her years at Grant Elementary School in the Van Dyke and Nevada neighborhood. Rita loved and enjoyed her teaching career, music, family, friends, and parish dearly. She liked playing golf, cards (poker and pinochle), and completing her New York Times crossword puzzles. She also enjoyed cocktail hour and watching classic movies. Very close to her granddaughters, she rarely missed their sporting and music events. A devout Roman Catholic, she was dedicated to her daily living rosary. She was very proud of her Polish-American heritage. She was a very talented, intelligent, and fun-loving woman. She was undoubtedly herself; full of life, love, humor, faith, and kindness. She left a lasting legacy of love and memories to her family. Rita was the loving wife of the late Thomas, dear mother of Todd (Laura) dear grandmother of Elizabeth and Claire and loving sister of the late Thaddeus "Ted" (the late Joan) Kapuscinski. She was also the aunt of Michael Kapuscinski, Katie Tomlian, Margaret "Peggy" Kwiatkowski, and the late Thaddeus "Cookie" Jr. Kapuscinski. Visitation Friday, February 26, 2021 2:00 pm - 8:00 pm at the Wasik Funeral Home, 49150 Schoenherr Rd. (N. of 22 Mile Rd.) Shelby Township. Funeral Saturday, February 27, 2021 at St. Hubert Catholic Church 38775 Prentiss St. Harrison Township, instate 10:00 am until time of Mass 11:00 am.

Rita Constance Stevens (nee Kapuscinski) was born July 1, 1930 to Theodore, a Detroit Police Officer and Genevieve (nee Dombrowski) Kapuscinski, a dance instructor and seamstress in Detroit, Michigan. She was the second born child behind her... View Obituary & Service Information

The family of Rita C. Stevens created this Life Tributes page to make it easy to share your memories.

Send flowers to the Stevens family.