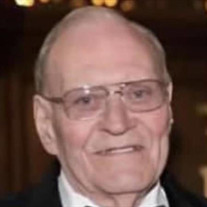 Richard Leach, of Sterling Heights, passed away Saturday, December 4, 2021, at the age of 84. He was born April 23, 1937 in Detroit, Michigan to the late Buck and Rose Leach. Beloved husband of the late Beverly. Loving father of Rose (the... View Obituary & Service Information

The family of Richard Leach created this Life Tributes page to make it easy to share your memories.

Send flowers to the Leach family.