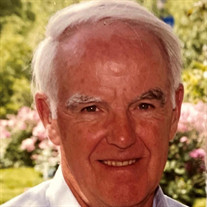 Peter A. Mulhern passed away peacefully at the age of 87 on March 22, 2022 at his home in Clinton Twp. surrounded by his loving wife and daughters. He is survived by his wife of 62 years, Helen and daughters Ellen (John) Engel, Maureen (Timothy) Moran, Patricia (Gordon) Post and Kathy (Brent) Haase. He is preceded in death by his beloved son, Peter (Terry) Mulhern. He was adored by his grandchildren, Brendan Mulhern, Patrick Engel, Gordon Post, Daniel Engel, Ellen Post, Claire Haase & Anna Haase. Peter was born in Detroit in 1935 to Helen and Daniel Mulhern. He is survived by his siblings Mary (the late Frank) Teodecki and Helen (the late Thomas) Ernst. He is preceded in death by his siblings, John “Jack” (Mary) Mulhern, Daniel (the late Marion) Mulhern & Margaret (the late Bert) Labadie. Dear brother-in-law to John Jeno (the late Dorothy) and the late Mary Ann (the late Bill) Harbour. He is further survived by his many nieces and nephews. Peter joined the US Army in 1956 and returned in 1958 to marry Helen and continued to work for 40 years at the 36th District Court in Detroit. He was an active member of St. Jude Parish in Detroit for over 30 years serving as an usher and school board member and enjoyed many parish social activities, especially the bowling league. When Peter and Helen moved to Clinton Township, he became active in the condo association board and served as president for many years. Everyone who knew Peter knew that he was an extremely kind, loving, gentle and peaceful person, and that he loved his family very much. His sense of humor and love of pranks was legendary. His laid-back yet fun-loving approach to life was a perfect blend of his Scottish and Irish heritages. Peter was fiercely proud of his heritage and you could often find him researching his ancestry online. He was always athletic and was frequently found in the stands and on the sidelines of his grandchildrens’ athletic events. He was an active grandpa whether it was shooting hoops, tossing a baseball, jetskiing and fishing with the boys and Coney Island breakfast dates and tolerating (even encouraging) selfies with the girls. Visitation for Peter will be on Sunday, March 27th, from 3pm to 8pm with a 7pm rosary at the Wasik Funeral Home, 49150 Schoenherr Rd., (N. of 22 Mile Rd.) Shelby Twp. Peter’s funeral mass will be on Monday, March 28 at 10:00a.m. (in state at 9:30) at St. Paul of Tarsus Catholic Church, 41300 Romeo Plank Rd. in Clinton Township. Entombment Service immediately following the mass will be at Resurrection Cemetery, Clinton Township. Memorial donations may be made to the American Cancer Society.

Peter A. Mulhern passed away peacefully at the age of 87 on March 22, 2022 at his home in Clinton Twp. surrounded by his loving wife and daughters. He is survived by his wife of 62 years, Helen and daughters Ellen (John) Engel, Maureen (Timothy)... View Obituary & Service Information

The family of Peter Mulhern created this Life Tributes page to make it easy to share your memories.

Peter A. Mulhern passed away peacefully at the age of 87 on March...

Send flowers to the Mulhern family.