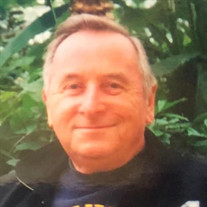 Norbert Stephen Poltorak, age 91, passed away in his home in Eastpointe, Michigan, on November 16, 2021. Norb’s wish to stay in his home of 65 years was able to be realized by his family with the gracious help and loving care of ABA Home Care and Hospice of Michigan. Norbert was born March 1, 1930 in Detroit, Michigan to Stephen and Frances (nee: Czarnecki) Poltorak. He so loved his country and joined the U.S. Army in August of 1951 proudly serving in the Korean War. Upon honorable discharge from military service in June of 1953, Norb followed his stepfather Stanley Kisielewicz’s footsteps into the bricklaying trade. He was a member of the Bricklayers and Allied Craftworkers (BAC) Union and enjoyed pointing out which buildings he built around Detroit. Norb believed that hard work, perseverance, and sacrifice were the guide to success and taught his family those exact values and traits. His family began On October 30, 1954 when Norb married Jacqueline Bank at Immaculate Conception Catholic Church in Detroit. They celebrated their Halloween season wedding with a reception full of masquerade masks and dancing. Norb and Jackie loved a good party and cherished their time with friends and family. Norb’s legacy continues through his daughter Lynne (Rick) Dusky; his sons, Andrew (Anne-Marie) Poltorak, and Chris (Dawn) Poltorak; his grandchildren, Jaclyn Tocco, Brent (Lauren) Stapleton, Lia (Brendan) McKernan, and Angela (Jason) Carroll. Additional survivors include his great grandchildren, Olivia, Evelyn, Jack, Julianna, Max, and Otis. Norb was preceded in death by his brothers Harry (the late Lottie) Poltorak, Leonard (the late June) Poltorak, and his adored wife, Jackie, who he has missed since her passing on June 1, 2020. A memorial liturgy will take place on November 22, 2021 at St. Isidore’s Church, 18201 23 Mile Road, Macomb, MI 48042. The Poltorak family will greet guests at 9:30 a.m. with a 10:00 a.m. mass. Immediately following mass there will be a celebration of life luncheon for family and friends. In lieu of flowers please send memorial tributes to The Alzheimer’s Association.

Norbert Stephen Poltorak, age 91, passed away in his home in Eastpointe, Michigan, on November 16, 2021. Norb&#8217;s wish to stay in his home of 65 years was able to be realized by his family with the gracious help and loving care of ABA Home... View Obituary & Service Information

The family of Norbert Stephen Poltorak created this Life Tributes page to make it easy to share your memories.

Norbert Stephen Poltorak, age 91, passed away in his home in...

Send flowers to the Poltorak family.