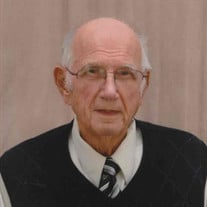 Nicholas "Nick" Sclafani of Warren, passed away on August 10, 2020 at the age of 93. He was born August 8, 1927 in Detroit, Michigan to Gesualdo and Concetta (nee Spelazzo) Sclafani. Nick served his country and was a proud veteran of the United States Army. He retired from Ford Motor Company as an electrician. Nick was an avid bowler and proudly displayed his 300 game ring. He enjoyed playing bocce ball, cooking and baking and just being with people. At Ford he was known at the "Donut Man" and became a familiar face volunteering at the St. John Coffee Shop. Nick loved baseball and to say Nick was an avid Detroit Tiger fan would be an understatement. Friday nights during baseball season you would find Nick along with family members down at Tiger Stadium and most recently at Comerica Park. Being at Comerica Park with his family members was one of Nick's most "Happy Places." Nick's family extended far beyond his blood relatives. He was "Grandpa" to probably most of southeast Michigan. He was a wealth of knowledge, a pleasure to talk to, a role model to many, advice giver, a shoulder to cry on, everyone's greatest fan and all around gentle man that will remain in the hearts of many and forever be missed. Nick's great love in life was his family. Spending time with them and attending the many various activities were memories that will forever be cherished. Nick's guidance and strong family values are a legacy that will be passed along for generations to come. Beloved husband of the late Virginia. Adored father of Deborah (John) Kilcher, the late Nicholas "Skip" Jr. and the late Richard Sclafani, Sr. Cherished and loving grandpa of Jennifer (Christopher) Gebhardt, Ronald (Daniela) Miller, Joseph (Lisa) Miller, Richard Sclafani, Jr., Nicole (Mark) Szymczak, Vicki Fisher and Michelle (Anthony) Vallecoccia. Proud great grandpa of 13 great grandchildren. Also survived by many loving nieces and nephews. Nicholas is predeceased by his 5 siblings. Visitation Wednesday 2-8 p.m. at the Wasik Funeral Home, Inc., 11470 Thirteen Mile Road (west of Hoover) Warren. Family and friends will gather on Thursday 12:30 pm for a Graveside Committal Service at Resurrection Cemetery, Clinton Township. ***In keeping with the State of Michigan Executive Order, The Wasik Funeral Home requires masks to be worn inside the Funeral Home, no food or beverages allowed inside the funeral home and 10 people or less in each chapel.

Nicholas "Nick" Sclafani of Warren, passed away on August 10, 2020 at the age of 93. He was born August 8, 1927 in Detroit, Michigan to Gesualdo and Concetta (nee Spelazzo) Sclafani. Nick served his country and was a proud veteran of the... View Obituary & Service Information

The family of Nicholas "Nick" Sclafani created this Life Tributes page to make it easy to share your memories.

Nicholas &quot;Nick&quot; Sclafani of Warren, passed away on August 10,...

Send flowers to the Sclafani family.