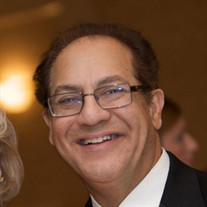 Maroun Joseph Hakim, born April 28, 1950, passed away on February 29, 2020 surrounded by his family. He lived passionately and will be remembered by all who were lucky enough to know him. Maroun was married to the love of his life, Lidwina (Lidy), for 39 years. He is survived by his children Alyia (Nijad) Hakim-Mehanna, Peter (Sheriann), and David. He was a doting Jiddo to Emilien, Gisele, Everett, George, and August. Maroun had a special bond with his siblings, Roy (Tammy), Mary (Allan) Brazier, Sam (the late Mary Jane), and Joann (Michael) Carpenter. He was beloved by all of his other siblings in law, numerous cousins, and friends. Maroun was predeceased by his parents, Joseph and Emily (Rahi) Hakim, son, Simon Paul Hakim, and sister, Emma (Paul) Bochenek. Maroun was a graduate of St. David High School, University of Detroit, and Thomas Cooley Law School. He loved the practice of law and was a pillar of the legal community for 42 years. The most rewarding part of his practice was the friendships he built with his fellow colleagues. He was also a devoted member of the Catholic Church and was president of the Men's Club at St. Sharbel Maronite Catholic Church, a member of the Knights of Columbus, Alhambra, and the Independent Order of Odd Fellows. Maroun loved to travel and went all over the world with his wife, Lidy. From cruises, tours through Europe, to Lebanon, and quick jaunts to Florida, he was always ready for the next trip. Maroun's life was full of love and laughter. He loved his wife with all of his heart and his greatest accomplishment was their children. He was so proud of their achievements and fiercely supported them. Maroun's memory will live on forever in those whose lives he touched. Instate Saturday from 9:30 am until 10:30 am. Funeral Mass at St. Sharbel Maronite Catholic Church, 43888 Hayes Road, Clinton Township, Michigan. Visitation Thursday and Friday from 3-8 pm at the Wasik Funeral Home, Inc. 49150 Schoenherr Rd. (N. of 22 Mile Rd.-Shelby Twp.). In lieu of flowers, donations can be made to the Juvenile Diabetes Research Foundation. www.jdrf.org

Maroun Joseph Hakim, born April 28, 1950, passed away on February 29, 2020 surrounded by his family. He lived passionately and will be remembered by all who were lucky enough to know him. Maroun was married to the love of his life, Lidwina... View Obituary & Service Information

The family of Maroun Joseph Hakim created this Life Tributes page to make it easy to share your memories.

Send flowers to the Hakim family.