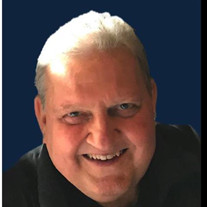 Mark Joseph Kujawski entered eternal life, peacefully in his home, on the evening of Sunday, April 19, 2020. His loving and witty spirit is carried on by the only love of his life of 54 years (married 46+ years), three children, eight grandchildren and an extended family of relations and friends from every walk of life. Mark was known by many family and friends as “Chico”, “Sparky”, and “Mustang”. He had a love for music and muscle cars, especially the Ford Mustang. His love for the mustang proved as such, owning many different models throughout the years. His love for music began as a little boy. Growing up in Hamtramck, Michigan, he started drum lessons at Americana Music Studio, on Conant. By the time he was 12, he was teaching other students. Mark, his brother John, and childhood friend Jerry would soon create a band called “The Emerald’s”. Mark spent most weekends of his teenage years and almost half of his adulthood playing for weddings and other major celebrations. He retired his drumsticks in 1991, coming out of retirement 10 years later to play a few songs with former bandmates, at his daughter and son-in-law, Karyn and Michael’s wedding in 2001. Mark had a successful career in the pharmaceutical industry. He began as a sales rep for Warner Chilcott in 1974, switching companies to Miles Pharmaceuticals in 1979. At the pinnacle of his career, Mark won the elite and prestigious President’s Club Award in 1990, as a Division Sales Manager. He retired after 26 years of service with Bayer Pharmaceuticals (Formally Miles Pharmaceuticals) in 2005. Mark’s love for his family was undeniably always his highest priority. He and Cindy enjoyed spending as much time at their cottage up north as they could. For over 30 years, Mark enjoyed taking his kids and grandkids tubing and skiing around the lake in the summer, always ending the day with an evening sunset cruise on his pontoon, while the winters were spent snowmobiling. Playing cards, whether it was pinochle, euchre, or poker, was always a favorite he enjoyed and a must at any family gathering. While playing poker and betting on the ace, Mark always said, “Can’t embarrass the ace…quarter!” Mark is survived by his wife, Cindy; children and grandchildren, Paul (child, Conner), Karyn Dreer (husband, Michael; children, John, Matthew, Ella and Andrew), and Sharon Muckenthaler (husband, Rich; children, Kierstin and Preston), and grandchild, Jacob, along with many in-laws, nephews, and family and friends too numerous to list, but not forgotten. Mark is lovingly reunited with his parents and brother, John J. and Rose (Suychta) Kujawski and John E. Kujawski. Visitation Sunday April 18 from 3-8 PM with a 7:00 PM Rosary (rosary will be live streamed on our website under the 'photos and Videos' tab if using a PC, Mac, or tablet and under the 'Media' tab if using a smartphone) at the Wasik Funeral Home, Inc. 49150 Schoenherr Rd. (n. of 22 Mile Rd.) Instate Monday April 19 10:30 until 11:00 AM Funeral Mass at St. Mary of the Hills Catholic Church 2675 John R Road (s. of Hamlin) Rochester Hills, Michigan. ****ATTENTION FOR THOSE THAT CAN NOT MAKE IT TO THE CHURCH*** Funeral Services will be live streamed at https://youtube.com/c/StMaryoftheHillsCatholicChurch **Please note that because of the health crisis in our country visitation is limited to no more than 25 people at a time at the funeral home. You may be asked to wait until we are within capacity limits. Also note that face masks will be required to be worn for your entire visit. Your cooperation is greatly appreciated.

Mark Joseph Kujawski entered eternal life, peacefully in his home, on the evening of Sunday, April 19, 2020. His loving and witty spirit is carried on by the only love of his life of 54 years (married 46+ years), three children, eight grandchildren... View Obituary & Service Information

The family of Mark Kujawski created this Life Tributes page to make it easy to share your memories.

Send flowers to the Kujawski family.