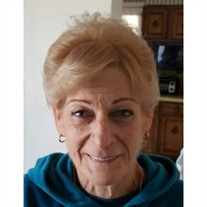 Marcia Schave (nee Rabine), age 67, a resident of Chesterfield, passed away peacefully, January 2, 2021. Marcia was born on November 10, 1953 in Mount Clemens, Michigan, to Robert and Grace (nee Misiak) Rabine. Loving mother of Scott (Deborah) Pranger, Dustin (Meagan) Schave, the late Michael Schave, and step mother of Ryan (Valerie) Schave. She is also survived by her siblings James (Carolyn) Rabine, Marleen Younts, Grace Bernardo and Ronald (Taryn) Rabine, her grandchildren William Pranger and Livia Pranger, and many nieces and nephews. She was predeceased by her father Robert Rabine, mother Grace Rabine, brother Thomas Rabine, and son Michael Schave. She was an avid volunteer with the L'Anse Creuse School District during the 1990s and 2000s. Two of her biggest personal passions were gardening and cooking delicious food, which was enjoyed by many. Memorials may be made to the Humane Society of Macomb. Visitation at 10:30 a.m. with a Mass at 11:00 a.m. on Tuesday, February 2, 2021 at St. Hubert's Catholic Parish Church, located at 38775 Prentiss St., Harrison Township, MI 48045.

The family of Marcia Schave created this Life Tributes page to make it easy to share your memories.

Send flowers to the Schave family.