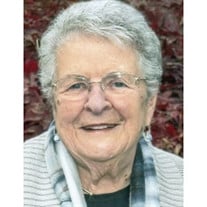 Loretta Josephine Cortis, 90, of Chesterfield, Michigan passed away on January 10, 2021 at her home in the Village of East Harbor in Chesterfield, Michigan after a month-long battle with pancreatic cancer. Loretta was born on July 11, 1930 in Detroit, Michigan to Joseph and Mary Pace. She met her husband of over 50 years of marriage in Lexington, Michigan. The family had a stone cottage there that her father and grandfather built. Loretta and her husband, Vince, after retirement did a "fixer upper" and lived there in summers while traveling to Florida in winters. She worked by her husband's side in his many businesses while raising her family. When they moved to Algonac, she worked at the bank and when she retired, she was managing two branches. They were snow birds sharing time between Florida and Lexington. They returned to Michigan full-time to the Villages of East Harbor in 2011. Loretta loved life and made friends easily. She loved to read, cook, and do her crafts. She knitted scarves, and tied blankets, to name a few of her many talents. She wanted to dance right up until the end of her life. Her little dog, Gigi kept her active and walking around the quad at the village until the very end. Loretta is survived by her loving children Jane Muscat (George Guffey), Dan (Teresa) Cortis, and Joe (Kristie) Cortis, her grandchildren: Marissa Muscat (Travis Feist), Paul (Kristi) Muscat, Frank (Cassie) Muscat, Rachel (Nikki) Cortis, Amy Cortis, Beth (Justin) McKoan, Joseph (Natalie) Kerry, Nina Kerry; and great grandchildren: Paul, Lauren, Luke Muscat, Charlie, Noah Cortis , Carter, Addison, Nolan McKoan, Rowley, Joey Kerry, and seven step-great grandchildren; and her sisters, Josephine (Edward deceased) Cassar, and Gloria (Gerald) Peruski. Loretta was preceded in death by her husband, Vincent A. Cortis who passed away on March 22, 2013 and her daughter, Susan C. Cortis who passed away on November 12, 2015. In lieu of flowers, donations may be sent to the chapel of the Village of East Harbor, Chesterfield, Michigan.

The family of Loretta Josephine Cortis created this Life Tributes page to make it easy to share your memories.

Send flowers to the Cortis family.