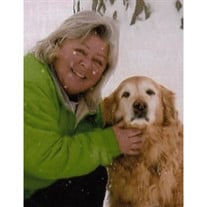 Linda "Weeah" F. Wilemski (Pettinato), 71 passed away Friday, December 31, 2021 in her home. She died peacefully in her sleep with her husband, David, and her dog, Finley, at her side. She leaves her husband David Alan Wilemski, sister Diane (Mike Kadrofske) Pettinato, nephew Samuel (Terri) Tews , great-nephew Emmett Tews, step children: David (Linda) Wilemski, Bryan (Tammy) Wilemski and Laura (David) Cutting and six grandchildren (David, Danielle, Ryan, Tanner, Shane and Nolan). She was proceeded in death by her parents, Lena Mae and Samuel Pettinato. Linda was born in Detroit, Michigan on January 19th, 1950 to Lena Mae and Samuel Pettinato. She became a big sister in 1956 when Lena and Samuel welcomed their second child, Diane Pettinato, into this world. Diane and Linda shared a bond all sisters strive to have. Each was maid of honor at each other's weddings and Diane describes Linda as her best friend and the greatest sister. While growing up on the east side of Detroit, Linda met two girls that would end up becoming lifelong friends: Barb Sny and Irene Kaminski. From a very young age Linda had a love for ice skating. Every winter her father would build an ice rink in the backyard of their Beaconsfield home. As Linda got older she passed her love for skating on to others as an instructor. With her first husband, Hank Bretz, Linda operated an ice skate sharping business. She was a devout Red Wing fan and loved going to the New Year's Eve games with Dave every year. Linda graduated from Edwin Denby High School, Detroit MI, in 1967 and from Macomb Community College, Warren MI, with a liberal arts degree in 1968. She received her Licensed Practical Nurse Diploma in 1969 from St. Joseph of Practical Nursing, Mt. Clemens MI. She worked as an LPN for over 30 years working among other places: Cottage Hospital in Grosse Pt and was the Midnight charge nurse at Saratoga General in Detroit for many years. It was while working at Saratoga General where she met another lifelong friend: Linda Wroble. Linda retired from the Macomb County Senior Services Adult Day Care Program. While working at the adult day care she touched the lives of numerous patients under her care. One of her biggest joys in life was taking her golden retriever certified service dog, Seger, with her to work each day to bring joy to the patients. Linda loved animals, especially her dogs: Rusty, Sam, Mac, Seger, and Findley. Linda and her husband David were married for 40 years and lived on Lake St. Clair their entire lives together. She applied her artistic talents designing every aspect of their home and especially enjoyed planting and tending to her various flower gardens. Together they enjoyed sitting on their deck and soaking in the beauty of nature. Linda enjoyed jazz and was a yearly enthusiast at the Detroit Jazz Festival. A great deal of music flowed through her while she played her baby grand piano. A memorial service will be held with date and details to be determined at a later date. Memorials made to the family to help pay for funeral expenses.

Linda "Weeah" F. Wilemski (Pettinato), 71 passed away Friday, December 31, 2021 in her home. She died peacefully in her sleep with her husband, David, and her dog, Finley, at her side. She leaves her husband David Alan Wilemski, sister Diane... View Obituary & Service Information

The family of Linda F. Wilemski created this Life Tributes page to make it easy to share your memories.

Send flowers to the Wilemski family.