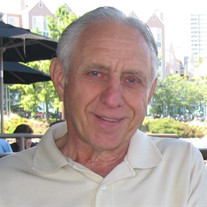 Leonard Kowalski December 24, 1935-March 28, 2022 Leonard passed away on March 28, 2022 in the early afternoon. He was the youngest of four children and was born on December 24, 1935 to Louis and Mary Kowalski in Hamtramck, Michigan. He grew up in Hamtramck and graduated from Hamtramck High School in 1955. After a high school, he worked for Eskimo Pie a short while before beginning work for Chrysler in 1955 at the age of 19. He worked there for the next 39 years. He always worked in or around the Detroit area except for 6 month stint working at the Chrysler plant in Toluca, a suburb of Mexico City, Mexico in 1966. He last worked as a Draftsman at the Chrysler Tech Center in Auburn Hills, MI. After retiring he was active in planning events for the Chrysler retirees as he made many friends at Chrysler over the years and into retirement. He met his wife Nelda Joyce in 1962 where they were active in the Hamtramck Skin Divers Club which Len was one of the founding members. They were avid scuba divers throughout many lakes in Michigan, Canada, the Florida Keys and in Mexico. They went on many adventures together in their camper and made many memories throughout Michigan, across the country and Canada. He moved the family to a small farm in 1975 where he raised cows, pigs, and chickens, and the occasional goose, duck, horse, lamb, and many barn cats. He enjoyed farming and all the projects that went along it, and raising their two children. He grew hay, wheat, oats, speltz, and corn over the years that he used to feed his animals. He enjoyed traveling to visit his adult children across the U.S. and he and Nelda Joyce would find outdoor adventures wherever they traveled which usually included biking, skiing, hiking, snow shoeing or relaxing on beaches. Len was always known for being funny and for having so many stories to tell. He loved visits with family near and far over the years. There wasn’t anyone he met that he didn’t make friends with. In his later years he enjoyed watching and listening to his 3 grandchildren play in his home. As his health began to fail, he always seemed to be just a little better when family was visiting. He persevered through his failing health for many years as he loved his family. He joins in heaven, his mom, dad, sisters Eleanor Wojtalik, brother in law Louis Wojtalik, and sister Irene Lind, brother in law Arthur Lind, niece Susan Lind, and son-in-law Manuel Campos. He is survived by his wife of 58 years, Nelda Joyce; son Michael (Renee); daughter Alison Campos; 3 grandchildren Alexandria, Jacob and Anamaria Campos; sister Dolores McLaren (Frank); and many nieces and nephews that he loved dearly. Visitation for Leonard will be on April 16, 2022, from 10:00 a.m. until a 12:00 p.m. funeral service at the Wasik Funeral Home-Gendernalik Chapel, 35259 Twenty Three Mile Rd., New Baltimore.

The family of Leonard Kowalski created this Life Tributes page to make it easy to share your memories.

Send flowers to the Kowalski family.