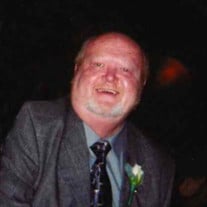 Lawrence J. Robinson was born on August 10, 1945 in Detroit, Michigan to John and Alice Robinson. Larry passed away at Henry Ford Macomb Hospital in Clinton Township on Sunday, August 15, 2021 at the age of 76. Larry was a beloved educator who went on to become a high school principal and later a principal of an alternative program in Hazel Park (the Breakfast Club). Larry taught night school programs to accommodate differing schedules for his students. In addition to his time working for Hazel Park Schools Larry also spent time teaching at St. Clement School. This loyalty to his profession and his students earned Larry the honor of 'Teacher of the Year' in Hazel Park. While teaching Larry organized and chaperoned many memorable trips for his students. Larry was also deeply devoted to his wife Terri and his many nieces and nephews. Aside from this Larry was also deeply committed to his Catholic Faith. You always knew that Larry was in the congregation when he started to sing the hymns at Mass. He had a spontaneous side too and it wasn't uncommon for Larry to jump in the car and see where the road took Terri and him. He'd often find himself at Houghton Lake sometimes just for the benefit of getting out of the house. Another place that you'd see Larry was at the local casinos trying his luck at any number of games of chance. Being a history teacher for part of his long career Larry loved to talk history and politics and he had his beliefs but being a trained educator Larry also knew the value of the opinions of others and would listen to and courteously debate ideas from both sides of the political spectrum and was generally not one to start a confrontation on these things. Larry was also a great cook and loved spending time in the kitchen whipping up meals for Terri and the rest of his extended family. When family was together it wouldn't be uncommon for Larry to partake in an occasional shot of whiskey. He also loved to dance and spent many nights in his youth going out to dance. Above all else Larry incredibly devoted to his family and was always someone that you could count on for any kind of help. He was one of those guys that to know him was to love him. Larry is the beloved husband of 49 years of Terri. Dearest brother of Diane (David) Budnick, Jacqueline (Gerry) Rys, Leona (the late Bill) Grinols, Marlene (the late Delano) Valenti, and the late Johnny Robinson and the late Leonard (Marcia) Robinson. Dear brother in law of Elaine (the late Joe) Ewing, Bernice (the late Daniel) McIlwain, and the late Celine (the late Jim) Shiemke, and the late Robert (Janet) Darga. Deeply loved uncle of Michael Budnick, Shawn Robinson, Jessica Kuhn, Jon (Kristin) Rys, Gerard (Carissa) Rys, Kelly (Eric) Gendernelle, Steven (Brandi) Grinols, Peter (Jill) Shiemke, Joseph Shiemke, Colleen McIlwain, Everett McIlwain, Christian (Sarah) Darga, Ryan (Amanda) Darga, Grant (fiancee Jacqueline) Darga and the late Della (Mike) MacKay and the late Helen Jones. Visitation Thursday 3-8 PM with a 6:30 PM Scripture Service at the Wasik Funeral Home, Inc 49150 Schoenherr Rd. (n. of 22 Mile Rd.), Sheby Twp. Instate Friday 9:30 AM until 10:30 AM Funeral Mass at Our Lady Queen of Families (St. Clement site) 25329 Van Dyke Ave (corner of Engleman and north of 10 Mile), Centerline.

Lawrence J. Robinson was born on August 10, 1945 in Detroit, Michigan to John and Alice Robinson. Larry passed away at Henry Ford Macomb Hospital in Clinton Township on Sunday, August 15, 2021 at the age of 76. Larry was a beloved educator... View Obituary & Service Information

The family of Lawrence John Robinson created this Life Tributes page to make it easy to share your memories.

Send flowers to the Robinson family.