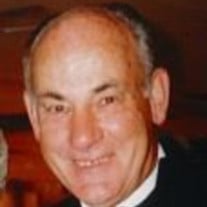 Kenneth B. LaForge was born on March 4, 1935 in Detroit to Julius and Josephine. Kenneth passed away peacefully with his family by his side on March 5, 2022 at the age of 87. Ken was an avid golfer was very proud to have posted two hole-in ones in his lifetime. He also loved to bowl in his “spare” time and bowled two 300 games as well. Other hobbies included breaking even at the casino, playing cards (specifically euchre) and watching golf tournaments and his Detroit Tigers on television. Happy hours filled with Southern Comfort were absolutely a part of his routine. As a young boy, little Kenny served as an altar boy with his brother, Richard, at St. Philip in Detroit. Ken was a devout Catholic and never missed a Sunday mass. What he loved more than anything was his wife, Joan, who he has loved since he was 16 years old. Ken and Joan were happily married for 65 years and, by definition, was a true “family man” in every sense of the word. Annual family vacations to Lewiston were a tradition. Nothing pleased him more than cheering on his children and grandchildren at their sporting events. Ken was always the first to arrive, so he could get the best seat in the front row. Ken was blessed with many friends who he also traveled with frequently. Ken’s legacy will be one of love and kindness. He will be remembered as a man who gave the best hugs, had a huge heart and a genuine interest in other people. Loving husband of Joan. Dear father of Robert (Kimberly), Ryan (Tee), Renee (Mark) Finkel. Loving grandfather of Sean. Devin, Andrew, Lauren, Amanda, Ava, and the late Rebekah. Dear brother of the late Fritz, Richard, Donald, and Anna Marie. Also survived by many nieces and nephews. Visitation Monday, March 14, 5-8 PM at the Wasik Funeral Home, Inc. 49150 Schoenherr Rd. (n. of 22 Mile Road), Shelby Twp. Instate at church Tuesday, March 15 at 9:30 AM until a 10 AM funeral mass at St. Therese of Lisieux, 48115 Schoenherr Rd, Shelby Township. In lieu of flowers please consider making a donation to Compassion Pregnancy Center 37540 S Gratiot Ave Ste 100, Clinton Township, MI 48036 in memory of his beloved granddaughter Rebekah Ann Finkel.

Kenneth B. LaForge was born on March 4, 1935 in Detroit to Julius and Josephine. Kenneth passed away peacefully with his family by his side on March 5, 2022 at the age of 87. Ken was an avid golfer was very proud to have posted two hole-in... View Obituary & Service Information

The family of Kenneth B. LaForge created this Life Tributes page to make it easy to share your memories.

Send flowers to the LaForge family.