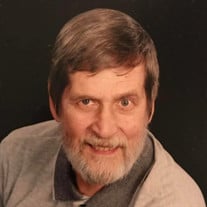 Kenneth Gerbasi - a husband, father, grandfather, great grandfather and friend, passed away on Tuesday, September 28th, with his wife Antoinette by his side. He was 75. He was born on March 29th 1946 in Cleveland, Ohio to the late Charles and Agnes Gerbasi. He loved the outdoors. He enjoyed camping, fishing, fiddling in his garage and fixing or trying to fix every broken part, piece of furniture or whatever needed repaired. Watching NASCAR was a one of his guilty pleasures as well as watching old westerns, with a big bag of popcorn until the middle of the night. We have memories of waking up on Sunday mornings to the sound of country music on the radio or the record player. Patsy Cline, Willie Nelson, Charlie Pride, George Strait and Kenny Rogers were just some of the artists our dad enjoyed. Our dad will be remembered for his 32 year fight against Multiple Myeloma. A form of Cancer that has a 15 year survival rate. Our dad fought it and beat it multiple times. Dad, mom and family were active with the American Cancer Society Relay for Life. They enjoyed their church parish, St. Margaret of Scotland. Every Sunday 8:00 a.m. mass, they sat in the front row. If they weren’t there, people noticed. What made our dad most happy though, was spending time with his three children, six grandchildren and two great grandchildren. Our parents didn’t want their grandchildren growing up in day care, they had grandchildren at there house Monday thru Friday for 26 years. Our dad took his grandchildren to and from school, made sure they got to all their athletic practices as well as theatre practice. He was at every football, baseball, softball, basketball, soccer, volleyball and plays for 26 years in a row. Our dad was a quiet guy. He preferred to stay behind the scenes, but everyone knew our dad even though he would call himself “Mr. Nobody”. When our dad did say something, it was always funny. He will be sorely missed by more friends than even he knew he had. His memory will be kept alive by his wife of 56 years, Antoinette Loving children, Timothy(Dawn), Charlyne(Jack) and Matthew(Carly). His six adored grandchildren, Stephen, Jaclyn, Kenny, Rebecca, Raymond, Tyler and two great grandchildren, Skylar and Milo. His brother Robert(Mary) and sister Charlyne(Mike). Along with nieces, nephews and many loving friends. Visitation Friday 2-8 p.m. at the Wasik Funeral Home, Inc., 11470 Thirteen Mile Road (west of Hoover) Warren. Instate Saturday 12 noon until time of Funeral Mass 12:30 p.m. at St. Margaret of Scotland Catholic Church, 21201 Thirteen Mile Road (between Little Mack & Harper) St. Clair Shores. In lieu of flowers memorial contributions to the American Cancer Society are preferred.

Kenneth Gerbasi - a husband, father, grandfather, great grandfather and friend, passed away on Tuesday, September 28th, with his wife Antoinette by his side. He was 75. He was born on March 29th 1946 in Cleveland, Ohio to the late Charles... View Obituary & Service Information

The family of Kenneth Gerbasi created this Life Tributes page to make it easy to share your memories.

Send flowers to the Gerbasi family.