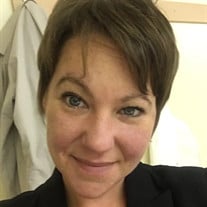 Kathryn “Kathy” Ann Wright Peacock, age 41, died suddenly November 1, 2020 leaving behind so many people that loved her. Born Kathryn Ann Wright on April 8, 1979 to Marlene and Edward Wright in Wayne Michigan. She grew up in Garden City and graduated from Garden City High School. Kathryn earned her bachelor’s degree in Mortuary Science with honors from Wayne State University and spent the majority of her career serving families in Macomb County at the A.H. Peters Funeral Home in Warren. Her desire to wander eventually took her out west for nearly a year to Hardin Montana and the Bullis Mortuary before knowing she was truly a midwestern gal and returned to Michigan. She was so very proud of being a Funeral Director and had an accomplished career. Those who worked with her are fortunate as Kathryn was a truly special funeral professional. Kathryn was a private and beautiful person, she loved simple things like being called darling. She was gorgeous, smart, skinny, kind, pretty, funny and skinny (sic) and never tired of being reminded of those things. She loved animals, and rescued numerous elderly pets, mostly dogs, but her last rescue was a cat named Halloween which she lovingly called “hammie.” Kathryn is survived by her mother Marlene Wright, her father Edward Wright, Her brother Jeff (Tracie) Wright, her stepsiblings Samantha (Anthony) Thomas, and Johnny Slowiak, her niece Megan Bryant, her Aunt Leanne (William) Cowen, her husband Branson Peacock, her stepchildren, Addison, Grayson and Jameson Peacock, her mother-in-law Jeanetta Chowns, her sister-in-law Angel (Mark) Travis, her brother-in-law Clint (Marie) Peacock, step-nephew Carter Peacock, step-nieces Kailyn and Jaidyn Peacock, her cherished friend Steven Steinetz and numerous friends and extended family. Kathryn is preceded in death by her stepfather John Slowiak (whom she loved dearly and never recovered from his passing) and her grandparents James and Dorothy Allen. Her life will be celebrated on Saturday November 14, 2020 at the Wasik Funeral Home, 49150 Schoenherr Rd., Shelby Township, MI 48315 with Memorial Visitation from 5:00 PM until 7:00 PM with her service immediately following. Kathryn was a Funeral Director and hated hauling flowers around. In honor of her let’s not do that to her Funeral Director friends and the staff of Wasik Funeral Home. Your support and sympathy is enough, consider a donation to the ASPCA or another animal rescue charity instead.

Kathryn &#8220;Kathy&#8221; Ann Wright Peacock, age 41, died suddenly November 1, 2020 leaving behind so many people that loved her. Born Kathryn Ann Wright on April 8, 1979 to Marlene and Edward Wright in Wayne Michigan. She grew up in Garden... View Obituary & Service Information

The family of Kathryn 'Kathy' Ann Peacock created this Life Tributes page to make it easy to share your memories.

Send flowers to the Peacock family.