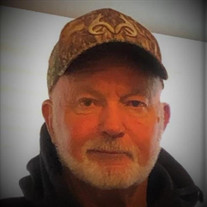 Johnny D Newlin Sr. passed away February 10, 2022, at the age of 69. He was born July 29, 1952, in Garden City. The son of the late Edward (Ted) Newlin and Janet Newlin Coleman, Stepson of Peggy Newlin. Survived by his beloved wife of 49 years, LeeAnn Newlin (Rees). Loving and devoted father of Johnny Jr. (Dawn) Newlin and Jayne Thiel (Fiancée Jay Carrigan). Loving and proud papa of Johnny Newlin III and Mya Thiel. Brother of Debbie Newlin Gibson, Denise (Leo) Parrott, and Judy Schlaufman Roegner. Brother-in-law of Jim (Lori) Rees, Tina (Ernie) Rackley, and Bill (Jeannie) Rees. Also survived by his precious Aunt Barb, many cousins, nieces, and nephews. John was an IBEW Local 17 Member for 47 years and retired from DTE Energy as a Lineman Supervisor after 28 years. He was a dedicated father, during the summer months you could always find him out on the Algonac Little League fields mentoring the youth while serving as President of the league for many years. As his children grew, he continued his passion of helping the youth of the community by founding the Algonac Sports Boosters with the support of many community members, many became lifelong friends. Upon retirement, he transformed the family cabin in Warblers, Lovells, MI into a home for LeeAnn and Him. Together they enjoyed countless hours doing projects to make their home their perfect place. He was so proud of his “perfect place,” it was hard to get him to leave and return to his original hometown of Algonac. He genuinely enjoyed hosting family and friends, especially sitting around his “masterpiece” bar sharing stories over a beer. His love for the Warblers Association showed, he served as a Board Member and/or President of the Association for twelve years. When his term ended, he became Manager, a role created just for him. He dedicated his retirement years to Warblers and wanted it to be the best little get away for its members and families. Once again, it was all about the kids. You could always find him at the trout pond encouraging the little ones at the annual Memorial Day fishing tournament, that him and LeeAnn sponsored, driving the tractor for wagon rides, spending the day over the pit roasting a pig for the annual 4th of July pig roast and ending the evening lighting fireworks for his spectacular firework show that he started 5 years ago for the Warblers families and Lovell’s community. He was busy from morning to night lending a hand around the Association and loved every minute of it. When he was not tending to his home or the Warblers, he enjoyed hunting, fishing, golfing, and adventuring the trails in his infamous Blazer or by snowmobile. He was the master of the northern Michigan trails. He also had a love for traveling, especially being at his condo in Maui during the cold winter months living the beach life, snorkeling, swimming, and fishing. His adventurous side also had him hiking around Maui’s landscape. His Grandkids meant the world to him and often be the only thing to get him back to Algonac for their soccer games, school events, and other celebrations. Once in Algonac, he enjoyed meeting up with friends on the boat, fishing with his son, and thinking how fast he can get back north! He has touched the lives of so many and left us with fond memories to cherish.

Johnny D Newlin Sr. passed away February 10, 2022, at the age of 69. He was born July 29, 1952, in Garden City. The son of the late Edward (Ted) Newlin and Janet Newlin Coleman, Stepson of Peggy Newlin. Survived by his beloved wife of 49 years,... View Obituary & Service Information

The family of Johnny D. Newlin Sr. created this Life Tributes page to make it easy to share your memories.

Send flowers to the Newlin family.