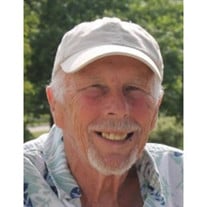 John Slavik, age 84, passed away unexpectedly, but peacefully, on Monday, July 26, 2021. He was born on July 7, 1937 in Detroit, Michigan to John and Helen (Ackens) Slavik. After high school, he joined the US Army as a paratrooper (Airborne Division) stationed in Germany. After serving his country, John started working with his father in the restaurant business. He worked his entire life as a Chef, most recently retiring from Telly's Place in Grosse Pointe, Michigan, after 20 years. John loved the outdoors! He rode motorcycles, built and flew his ultralight airplane, enjoyed camping and loved spending time on his boat at Harsens's Island with family, friends and his beloved dog, Splash. He was a great carpenter and handyman who could fix and build anything. John was a humble man who never wanted to be fussed over. He will be greatly missed by his beloved family and friends. He is survived by his children, John (Theresa), Cathy (Wayne), Anita and Debi, his grandchildren, Lauren, Susan, Brendan, Ryan, Isabella and Nathan, his brother Ken (Kim), his niece, Sheri (Keith), his nephews, Tim, Jeff (Jen), Jonathon (Katie) and his great niece, Zoey. He was preceded in death by his parents, John and Helen, son, Michael, brother, Richard, great niece, Leigha and his beloved fur baby, Splash. Family and friends are respectfully invited to attend a service at Resurrection Cemetery located at 18201 Clinton River Road, Clinton Township, MI 48038. The service will be held on Monday, August 16, 2021 at 11:00 a.m. There will be a luncheon immediately following the service. The location of the luncheon will be announced after the service. In lieu of flowers please make a donation to your favorite animal rescue.

John Slavik, age 84, passed away unexpectedly, but peacefully, on Monday, July 26, 2021. He was born on July 7, 1937 in Detroit, Michigan to John and Helen (Ackens) Slavik. After high school, he joined the US Army as a paratrooper (Airborne... View Obituary & Service Information

The family of John Slavik created this Life Tributes page to make it easy to share your memories.

Send flowers to the Slavik family.