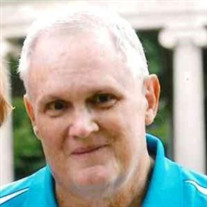 John Patrick Shannon, resident of Macomb Township, Michigan, passed away peacefully on Friday, May 8, 2020. He was 76 years of age. John fought a long, courageous battle with cancer and has now been called to his heavenly home. John was born in Perrysburg, Ohio on September 13, 1943, son of the late John Thomas and Helen Marie (Bowers) Shannon. He was the beloved husband of 49 years this August to Roberta (Bobbie) and loving father to Patrick Shannon and Holly (Todd) Goike. He is survived by two brothers, Richard (Denise) and Robert (Linda) Shannon and many nieces and nephews. John had a unique childhood having lived on Mackinac Island where his grandparents owned the island’s general store. He attended first through third grades at the Island’s school which met in the old Thomas W. Ferry School, converted at the time from a 19 th century Indian Dormitory, now a historic museum. His family later moved to Lansing, Michigan where John graduated from St. Mary’s High School and took classed at Michigan State University. In 1962, John decided to end his college days and enlisted in the U. S. Air Force where he was stationed at Biggs Air Force Bas in El Paso, Texas. He served our country honorably and was discharged in 1966. John returned home to Lansing and worked various jobs. He loved sports, was a track and football athlete in high school, and played for the Lansing All-Stars, a semi-professional football team. John later moved to the Detroit area and lived in Birmingham, Michigan where he got a sales position with National Rent-a-Car. He called on many companies, one being Parke-Davis Pharmaceutical Company. It was at this company where he met his soon to be bride Roberta (Bobbie), introduced to him by his contact at the company. On August 7, 1971 John and Bobbie were united in marriage at Mt. Calvary Lutheran Church in Detroit. They were blessed with two wonderful children, Patrick and Holly. In the 70’s, John decided to secure a job in the trades. In 1973, he went to work for TRW Automotive in Sterling Heights and became trained and certified in machine repair and worked there until 1990. After that, he went to work for Detroit Diesel Corporation until his retirement on October 31, 2007. Soon after retirement, he was blessed with four grandchildren beginning in 2008-2011, whom he adored and babysat for as much as possible. Unfortunately, his diagnosis with prostate cancer soon came as well and in 2009, his battle began and his fight was long and hard but his focus was always to be there for his family, to see his grandchildren grow, and watch them play sports for as long as possible. John was a strong, hardworking and caring man with an Irish fight for life. He was an avid sports fan and especially loved his Spartans, Lions, Tigers and Wings. He was always ready to talk sports, enjoyed golfing, photography and keeping in touch with his buddies. A Loving husband, father, papa, brother, brother-in-law, uncle and friend to many, there was never a doubt that he loved his family that his family loved him. We were blessed to have him and he will be truly missed. Rest in Peace dear John until we meet again. GO GREEN! In lieu of flowers, memorial contributions can be made in his honor to The American Cancer Society, your favorite charity, or directly to the family.

John Patrick Shannon, resident of Macomb Township, Michigan, passed away peacefully on Friday, May 8, 2020. He was 76 years of age. John fought a long, courageous battle with cancer and has now been called to his heavenly home. John was... View Obituary & Service Information

The family of John P. Shannon created this Life Tributes page to make it easy to share your memories.

Send flowers to the Shannon family.