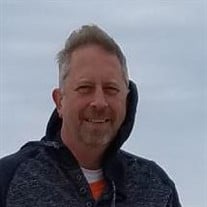 Jeffrey A. Wohlfield passed away on December 4, 2021, in Ann Arbor, Michigan at the age of 52. He was born on June 27, 1969, in Detroit, Michigan. A Gentle giant with a quiet and observing nature, most times he would often say very little, but when he spoke his words, they were very meaningful and most times humorous. Having a dry sense of humor, he would make you think about what he had just said, and then realize his remarks he just made were very funny. Butch was very handy, he wanted to fix everything from car repairs to home projects. There was nothing he wouldn’t try to fix. He also enjoyed wood working and making crafts to showcase and sell at craft shows, using his sense of humor he would label all his wood crafts with one of his nicknames “Made by: Butch Podorsek”. As a software designer, he took his gift of solving problems and fixing things into his livelihood. A natural athlete, he played baseball and in his early years and was best known for his pitching. He took his loved of the game into adulthood by playing softball and formed lifelong friendships. Although he also enjoyed golfing with his friends very much, Butch was a farmer at heart, he would take great pleasure in working outside doing his “chores” at his property around his home, he especially enjoyed growing all kinds of vegetables and fruits. His culinary skills were above most people; from baking his signature apple pies, grilling “butch burgers” and smoking his world-famous ribs, everyone looked forward to his well-known dishes. Above all his passions, he was devoted to his girlfriend Jackie, he enjoyed spending time with her and their summer trips to Petosky. Butch is also survived by his brothers; Kevin (Michelle VanDeVelde) Wohlfield and Tom Wohlfield, proud uncle of Tom and great-uncle of Tom and Keely. He will also by sadly missed by many loving friends and his best friend; Joe (Lee Ann) Wasik and their family. He was predeceased by his parents; Shirley and William Wohlfield. Visitation will be Friday from 4-8 pm with a sharing of memories service 7:30 pm at the Wasik Funeral Home, Inc., 49150 Schoenherr Rd. (n. of 22-mile Rd.) Shelby Township.

Jeffrey A. Wohlfield passed away on December 4, 2021, in Ann Arbor, Michigan at the age of 52. He was born on June 27, 1969, in Detroit, Michigan. A Gentle giant with a quiet and observing nature, most times he would often say very little,... View Obituary & Service Information

The family of Jeffrey A. "Butch" Wohlfield created this Life Tributes page to make it easy to share your memories.

Send flowers to the Wohlfield family.