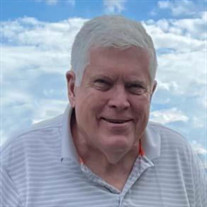 James Alan Pawlik was born on August 27, 1942 in Hamtramck to John and Rita Pawlik. James passed away on November 1, 2021 at Troy Beaumont Hospital after a brief illness. James was a very proud 1960 graduate of De La Salle Collegiate High School in Detroit. Following his graduation from De La Salle Jim enrolled at Lawrence Tech earning his Bachelors Degree in 1965. Jim worked as a mechanical engineer for Valeron Corporation for over 30 years before retiring. Retirement wasn't really for a guy like Jim so he found employment with Chrysler working with the automaker for over 15 years. When Jim wasn't hard at work he was hard at play finding time to fish, cook, enjoy his model airplanes, make trips to the casino, and spend time at the family vacation property in Oscoda. Jim's faith foundation guided him through his life. He and his beloved wife Mary were very active at St. Rene Goupil Catholic Church with Jim devoting much of his free time to the Knights of Columbus being a Past Grand Knight of the St. Nicholas Council 7011. The Knights were very important to Jim and he could be found preparing breakfast at St. Rene after Sunday Mass for 15 years. Jim was described by those that knew him as someone that was loyal, generous and devoted to the things that were important to him. Chief among those things that was near to Jim's heart was his family whom he cared for deeply especially his grandkids. Jim is the beloved husband of 56 years of Mary. Loving father of Scott (Sue) Pawlik, Kelly (Daniel) Novak, Brian (Sharri) Pawlik, and Lori (Bob) Leman. Proud grandfather of Steven Pawlik, John Novak, Sabrina Pawlik, James Novak, Annabelle Pawlik, Lily Pawlik, Carter Leman and Kinsley Leman. Dear brother of Robert (Kathy) Pawlik, Sue (Michael) Knudsen, and Tim (Karen) Pawlik. Visitation Thursday 2-8 PM with a 7 PM Knights of Columbus Rosary Service at the Wasik Funeral Home, Inc 49150 Schoenherr Rd. (n. of 22 Mile Rd.), Shelby Twp. Instate Friday 9:00 AM until 9:30 AM Funeral Mass at St. Rene Goupil Catholic Parish 35955 Ryan Road (s. of 16 Mile Rd), Sterling Heights.

James Alan Pawlik was born on August 27, 1942 in Hamtramck to John and Rita Pawlik. James passed away on November 1, 2021 at Troy Beaumont Hospital after a brief illness. James was a very proud 1960 graduate of De La Salle Collegiate High... View Obituary & Service Information

The family of James Pawlik created this Life Tributes page to make it easy to share your memories.

Send flowers to the Pawlik family.