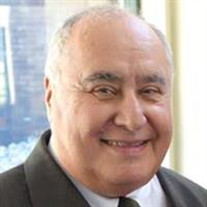 James Jerome (Jerry) Giachino of Oakland Township (formerly of Oxford and Troy), passed away peacefully on August 31, 2021, with his loving, attentive caregiver and daughter Cheryl by his side. He was born in Detroit on February 2, 1938, to the late James and Caroline (Allen) Giachino. He is preceded in death by the love of his life and wife of 50 years, Barbara (Niemi) Giachino, and his best friend and brother, Tom Giachino. His loving ways will be tremendously missed by his children: Angela (Tom) Siegmon, Cheryl (Dave) DeMeere, Renee (Chris) Bookout, Tom (Charley Welton), Lisa (Ed) Fromm and Tracy (Greg) White. He was a proud and loving Jidu (grandfather) to Emily (Michael) Erickson, Amanda (Sean) Kruk, Haley (fiance David Carey) Bookout, Nick Bookout, Kayla DeMeere, Ethan Fromm, Maddie Bookout, Charlie Fromm, Ryan Fromm, Sarah Fromm, and Trey White. The sparkle in his eyes over his last years came from his great-grandsons, Mikey and Tommy Erickson and Baby James Kruk. He is also survived by his sisters, Jeanette (Larry) Murphy and Denise (John) Fitzpatrick, sister-in-laws, Sandra Giachino and Marlene (Dale) Dawkins, special friend, Joan Zurgable, and many nieces and nephews. Jerry was a graduate of the University of Detroit (B.S. Architectural Engineering) and Wayne State University (Master of Science-Urban Planning). He served as a Lieutenant in the U.S. Army from 1961-1963, and then spent over 46 years working in the construction industry, most of it with Barton Malow Company, designing and building schools and universities throughout the country. In addition to belonging to and serving in numerous professional organizations (including the American Arbitration Association), Jerry served as an Adjunct Professor/Instructor at Lawrence Technology Institute and Wayne State University and donated thirty years as a member and past Chair of the City of Troy Zoning Board. His generosity of time, talent and treasures was unmatched. Jerry most loved spending time with his extended family, doing Sunday rounds to deliver donuts (and dog treats) to his family, and taking them on vacations to Disney, “Up North”, on cruises, and elsewhere. Some of his happiest times were spent driving the family on cross-country trips in their motorhome, singing to John Denver and “Paper Moon”. On Thursday, September 2, family and friends are invited to join us for visitation from 6-8pm (with the Family Rosary at 5:30 PM) at Wasik Funeral Home, 49150 Schoenherr Road, Shelby Charter Township. A funeral mass will be held on Friday, September 3, at 10:00 am at St. Kieran Catholic Church, 53600 Mound Road, Shelby Township, with an opportunity to pay final respects from 9:30 - 10:00 am. The family wishes to extend heartfelt thanks to the (awesome) staff at Blossom Ridge in Oakland Township, Fresenius Medical Care, the OPC, and Evergreen Hospice. If desired, memorial donations may be made to Michigan Paralyzed Veterans of America, 46701 Commerce Center Drive, Plymouth, MI 48170, www.michiganpva.org/support/online.

James Jerome (Jerry) Giachino of Oakland Township (formerly of Oxford and Troy), passed away peacefully on August 31, 2021, with his loving, attentive caregiver and daughter Cheryl by his side. He was born in Detroit on February 2, 1938, to... View Obituary & Service Information

The family of James J. Giachino created this Life Tributes page to make it easy to share your memories.

Send flowers to the Giachino family.