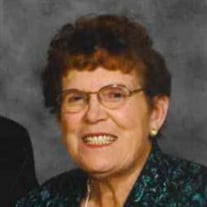 Helen Shoobridge, 91 of Highland Twp. Michigan, passed away on July 24, 2020. Loving wife of the late William Shoobridge and mother of 7 children, 9 grandchildren, and 9 great-grandchildren. Helen was born June 10, 1929 in Detroit, Michigan to the late Andrew and Jessie Jackson. Helen was raised in Utica, Michigan. On September 16, 1950 she married William Shoobridge at St. Lawrence Catholic Church in Utica, Michigan. Helen and Bill moved to what is now Macomb Township in 1951 to a house that Bill built, it is where they lived for the next 44 years and raised their 7 children. Helen raised vegetables, fruits and flowers and had a regular stall at Eastern Market for many years. She had regular customers had many friends at the market. Helen attended St. Isidore Catholic Church, where her 7 children went to school. In 1995, Helen and Bill moved to Lewiston, Michigan where they remained until 2009, when Bill passed away. Helen and Bill attended St. Francis Church in Lewiston. After Bill passed away, Helen lived in Chesterfield, Utica, Shelby Township and Highland. In 2018 Helen lived with her daughter Mary in Highland until she passed away. Helen is survived by her children, Dennis, Dan of Columbus Twp., Susan (Greg) Kowalski of Presque Isle, Pat (the late Don) Parshall of Sterling Heights, Bill (Cathy) of Macomb Twp., Anne Shoobridge of Macomb Township, Mary Swadish of Highland; grandchildren, Scott, Bob (Stephanie), Amber (the late Mark) Carvalho, Brian, Sarah, Bill (Sarah), Jesse, Spencer, Nick and great grandchildren, Alysia, Dominic, CJ, Skylar, Anthony, Max, Addy, Blake and Emma. Helen is survived by her sister-in-law, Eleanor Shoobridge and numerous nieces and nephews, including Evelyn Willard and Barbara Rivard and her longtime friend, Mary Yelenich. Helen was preceded in death by her brothers, Andy and Jim Jackson. Helen’s family will receive friends and relatives on Thursday, July 30, 2020 from 9:30 am until 11:30 am at the Wasik Funeral Home, Inc. 49150 Schoenherr Rd. (Shelby Twp.) After the visitation at the funeral home, there will be a Funeral Mass Thursday, July 30, 2020, 12 pm at St. Lawrence Church 44633 Utica Rd. (south of M-59). (There will be no visitation at the Church before Mass) Interment of her ashes next to her husband, Bill at Great Lakes National Cemetery at a later date.

The family of Helen Shoobridge created this Life Tributes page to make it easy to share your memories.

Helen Shoobridge, 91 of Highland Twp. Michigan, passed away on...

Send flowers to the Shoobridge family.