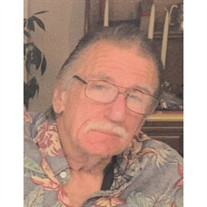 It is with a heavy heart that I share with you some very sad news. On September 1, 2021, God opened his loving arms and welcomed his newest angel, Mack McFeely. He was welcomed there by his mother and father, Virginia and Harry and his mother-in-law and father-in-law, Mary and Homer. Harry (Mack) McFeely was born in Detroit, Michigan on September 16, 1947 to Virginia (Lee) and Harry H. McFeely. He grew up on the Clinton River, where his dad made him his first boat when he was just 7 years old. It was the first of many. He enjoyed boating with family and friends for many years. He restored an antique Christ Craft speed boat that was his pride and joy for many years. He also enjoyed cars and car restoration. He did a ground up restoration of a 1969 Chevelle SS. It was restored with a lot of love and help from his many friends. He won many awards for the car, but his most proud moment was when he was invited to the Concourse de Elegance Car Show (invite only) at Meadow Brook. He won an award at that show as well. From 1968 - 1972, he served our country in the United States Coast Guard. He was part of the Honor Guard in Washington, D.C. He also attended photo school in Pensacola, Florida as part of his duties. The pride and joy of his life were his two sons, Michael and Christopher and his granddaughter, Lilly. He loved spending time with his family and friends. He tried to stay in contact with friends and family by calling them randomly just to talk and catch up. He enjoyed living on the water and taking care of his yard. He worked at General Motors Tech Center in Warren from 1981 until his retirement in 2016. He worked in ACH and V (Heating and Cooling), a trade he was very proud to have learned. In 2010, Mack was diagnosed with Parkinson's disease. Even with the limitations that awful disease put on him, he was determined to not let it stop him from enjoying life. His death was so unexpected and has left and emptiness that can never be filled. Mack is survived by his wife Susan (Wulbrecht), his sons Michael and Christopher and granddaughter, Lilly. His sister-in-law, Carol (Al) LaFontaine, brother-in-law, Tom (Sharon) Wulbrecht, his cousins, Gary (Mikki) Lee, Mark Lee, Mary Kay (David) Leahy and Gail (Walt) Woodworth. Predeceased by his brother-in-law, Robert (Nancy) Wulbrecht. Visitation 3:30 - 7:00 p.m. with a 7:00 p.m. Rosary on Thursday, September 9, 2021 at Gendernalik Funeral Home, 35259 23 Mile Road, New Baltimore. Instate at 10:00 a.m. until 10:30 a.m. Mass on Friday, September 10, 2021 at St. Mary Queen of Creation Church, 50931 Maria, New Baltimore. Memorials may be made to the Michael J. Fox Parkinson's Foundation.

It is with a heavy heart that I share with you some very sad news. On September 1, 2021, God opened his loving arms and welcomed his newest angel, Mack McFeely. He was welcomed there by his mother and father, Virginia and Harry and his mother-in-law... View Obituary & Service Information

The family of Harry "Mack" A. McFeely created this Life Tributes page to make it easy to share your memories.

It is with a heavy heart that I share with you some very sad...

Send flowers to the McFeely family.