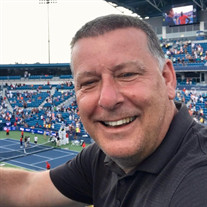 Graham Payne, 54, a design engineer from Fiat Chrysler Automobiles and resident of Macomb, Michigan, passed away unexpectedly on November 6th, 2020 at Henry Ford Macomb Hospital. The memorial will be held from 12:00 PM to 8:00 PM on January 10th, 2021 at Wasik Funeral Home in Shelby Township, Michigan. The memorial service will start at 6:00 PM. Graham was born in Portsmouth, England on October 17th, 1966. He graduated from Petersfield School and continued to receive a Higher National Certificate in Mechanical and Production Engineering from Highbury Technical College in Portsmouth, England in July of 1990. He started out as a Toolmaker in Petersfield, England from 1985 to 1990. From thereafter, he worked as an Engineer with various companies, and spent the last 20 years of his life working for Fiat Chrysler Automobiles in Auburn Hills, Michigan as a Design Engineer. Graham married Lisa on August 22nd, 1992 in Sheet Hampshire, England. They were married for 28 years. In early 2000, Graham, Lisa, and their children moved to Michigan so Graham could pursue his career at FCA. Graham was very proud of his profession and took pride in everything that he did. He would always tell his friends to buy Chrysler products, especially the Dodge Ram. Although working many hours, Graham still made the effort to put his family first. He was the biggest advocate of family. Graham refereed and coached for the American Youth Soccer Organization (AYSO), never missed a hockey game, and he organized many memorable camping trips and vacations. He was a very proud husband and father. He would talk endlessly about his family’s lives and successes. Graham was always a jokester. He was always laughing, telling jokes and making goofy faces, and never took life too seriously. He never sweat the small stuff and lived his life to the fullest. He enjoyed bowling with his wife Lisa every Monday night, playing billiards with his friends every Tuesday night, and golfing almost every weekend in the summer. Graham also loved camping, playing euchre and board games, and would always be taking on new home projects. Graham is survived by his loving wife, Lisa Payne; his children, Emily Payne and Harry Payne; his parents, Kenneth (Jasmine) Payne and June (Ralph) Balfour; his brother Martin (Christine) Payne; his twin sister Maria (Andrew) Fisher; his mother-in-law Wendy (Clive) Bentley; his brother-in-law Andrew (Andrea) Eade; and numerous nieces and nephews. Graham is preceded in death by his father-in-law Leslie Eade. Family, friends, and others whose lives Graham touched, are invited to Wasik Funeral Home on January 10th, 2021 to celebrate the life of Graham Payne. **Due to the current health crisis in our nation, face coverings that cover the mouth and nose must be worn at all times in the funeral home as well as at the church. Additionally we must limit the capacity at the funeral home to no more than 25 people at a time. This limit will remain in effect for the duration of the visitation as well as the funeral service. Please be advised that you may be asked to wait for people to dismiss before you can step in and pay your respects.**

Graham Payne, 54, a design engineer from Fiat Chrysler Automobiles and resident of Macomb, Michigan, passed away unexpectedly on November 6th, 2020 at Henry Ford Macomb Hospital. The memorial will be held from 12:00 PM to 8:00 PM on January... View Obituary & Service Information

The family of Graham Payne created this Life Tributes page to make it easy to share your memories.

Send flowers to the Payne family.