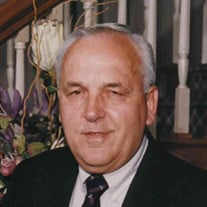 Frederick Carl Kuspa, 83, of Warren, Michigan passed away peacefully on Wednesday, March 3, 2021. He was born December 18, 1937. Born in Detroit, Fred was the third of eight children and graduated from Cass Technical High School. After high school, he enlisted in the U.S. Air Force and was stationed at the now-closed Eufaula Air Force Station located in southeastern Alabama. After President Kennedy was assassinated in 1963, Fred phoned his friend, Joyce Wierzbinski, to talk about the tragedy. That call turned into regular conversations for the couple – he was on a rotary-dial payphone, she was at home in Detroit. Fred was busy as a radar technician on the base, but also worked nights in a shoe factory to pay for an engagement ring. When he returned to Detroit, service completed, the couple married in August 1965, and their daughter, Donna, was born a year later. A son, Karl, followed in 1970. The Kuspas raised their children in Warren where they continued to reside. Fred worked his entire post-military career at Detroit Edison. He answered a newspaper ad for a job at the utility company and worked first as a fuse puncher, then as a debt collector and finally in consumer education before retiring in 2000. Part of the orientation for his Edison job included information about the Edison Boat Club, a sailing facility on the Detroit River where membership was available for employees. A visit to the now-razed clubhouse and Fred was hooked on sailing. He joined the Club in 1965 and began racing on the club-owned boats, always preferring shorter races on the river or Lake St. Clair to events like the Port-Huron-to-Mackinac race. Over the decades, Fred brought both of his children into the sport and also introduced countless other family members, friends, co-workers and their friends and families by teaching formal classes and informally on outings. Kuspa especially liked to help women learn the sport – they had only been allowed to take sailing classes the year before he joined the club. Fred was a multiple-time Flying Scot club champion. He also proudly served as Edison’s commodore in 1981. Another of his club projects included taking care of the Club’s power boat that was used as a race committee boat, the EBC IV. (The vessel had been used in the building of the Mackinac Bridge before coming to Detroit.) Fred also “commandeered” the Edison boat for tours of the Detroit River, having two preferred routes: one took a course downriver between Belle Isle and the Manoogian Mansion to the MacArthur Bridge, the other including a closer view of Belle Isle and a tour of the canals in Detroit’s east side neighborhoods. The EBC IV was restored under Fred’s leadership and re-launched in 2014, when the Club renamed it the P/C Fred Kuspa. After retirement from Detroit Edison, Fred spent more time playing tennis and traveling with his wife. They covered North America from Alaska to the Panama Canal to Hawaii and points in between. With his extended family, Fred was the event planner, convening gatherings of siblings, cousins, aunts, uncles where he insisted on dozens of photos at every occasion. The grandson of immigrants from Poland, Kuspa embraced his heritage by regularly attending events at the Polish Cultural Center and Detroit Tigers Polish Game Nights. Loved by many, Fred is survived by his loving wife of 55 years, Joyce (Wierzbinski) Kuspa; his daughter, Donna (Kuspa) Gray and her husband Jason; his son, Karl Kuspa and his wife Nancy (Caldwell); his sister Carolyn (Kuspa) Swope and brothers Anthony Kuspa, Phil Kuspa (Carolyn), John Kuspa (Mia), Thomas Kuspa (Katha), and Joseph Kuspa (Kim); sister-in-law Marcia (Wierzbinski) Polancih; brother-in-law Richard Wierzbinski (Kathy); and dear friend Robert Zaleski. Visitation Saturday 1-4 p.m. at the Wasik Funeral Home, Inc., 11470 Thirteen Mile Road (west of Hoover) Warren. Instate MONDAY 9 a.m. until time of Funeral Mass 9:30 a.m. at St. Blase Catholic Church, 12151 15 Mile Road (east of Dodge Park) Sterling Heights. Memorial contributions may be made to the Capuchin Soup Kitchen, Detroit **Please be advised that in accordance with restrictions from the Michigan Department of Health and Human Services we are limited to no more than 25 people at one time. Visitors are encouraged to keep their visits short to allow others the opportunity to pay their respects. Due to these capacity restrictions you may be asked to wait to pay your respects to the family until capacity numbers are within limits. In addition face coverings are required by all in attendance for the duration of their visit. Your cooperation is greatly appreciated.**

Frederick Carl Kuspa, 83, of Warren, Michigan passed away peacefully on Wednesday, March 3, 2021. He was born December 18, 1937. Born in Detroit, Fred was the third of eight children and graduated from Cass Technical High School. After high... View Obituary & Service Information

The family of Frederick C. Kuspa created this Life Tributes page to make it easy to share your memories.

Send flowers to the Kuspa family.