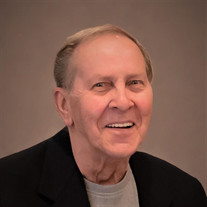 Frank J. Kaczmarczyk of Shelby Township, MI, age 79, died Saturday, July 18, 2020, of complications of lung cancer and lymphoma. A caring and considerate father and grandfather, he was appreciated by many as a loyal and faithful friend who could be depended upon. “Mick,” as he was known to his family, was especially devoted to his wife, Diane (Merta), the love of his life, whom he met in first grade at St. John Cantius Catholic School in the Delray neighborhood of Detroit. In their 55 years of marriage, they traveled as far as Hawaii and Alaska and spent several weeks each year in Florida and Tennessee. In Diane’s final years, Frank never left her side until her death in 2017 from lung cancer. Frank was born Dec. 6, 1940, in Detroit to Mitchell and Anne (Kochanski) Kaczmarczyk. He graduated in 1958 from Southwestern High School in Detroit and served in the U.S. Navy as an Aviation Communications Technician from 1958 to 1965. Following his honorable discharge, he worked for Michigan Bell Telephone, rising to the management position of Chief Switchman. He took early retirement from Michigan Bell after 25 years, and worked the reminder of his career in sales for KBC Tools & Machinery in Sterling Heights. During the financial crisis of 2007-08, he volunteered for layoff so that younger employees with families could keep their jobs. Frank gave generously of his time and treasure. He was a longtime supporter of countless charitable causes, and he devoted many years of volunteer leadership to organizations such as the community of Heritage Place in Shelby Township and to the Sterling Heights Softball Club among others. He was a member of the choir of St. Therese of Lisieux Catholic Church. Frank is survived by his sons Jeffrey (Cindy) and Joel (Noël); grandchildren Jessica, Michael, David, Kaitlyn, Brendan and Jaelyn; and brothers David and Jerry, of Virginia. He was preceded in death by his wife; his parents; and by his brother, Ronald Kaczmarczyk, and his sister, Annette Hedlund. At his request, immediate cremation has taken place. A memorial service will be held at St. Therese of Lisieux Church 48115 Schoenherr Rd. (Shelby Twp.) on Friday August 7, 2020 at 10 am. His family will receive relatives and friends at 9:30 am. Interment of his ashes, together with his wife, Diane, will be at Michigan Memorial Park in Flat Rock. Memorial contributions may be made to the American Cancer Society and Hospice of Michigan.

Frank J. Kaczmarczyk of Shelby Township, MI, age 79, died Saturday, July 18, 2020, of complications of lung cancer and lymphoma. A caring and considerate father and grandfather, he was appreciated by many as a loyal and faithful friend who could... View Obituary & Service Information

The family of Frank J Kaczmarczyk created this Life Tributes page to make it easy to share your memories.

Send flowers to the Kaczmarczyk family.