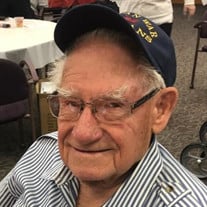 Eugene Anthony Wolfbauer passed away suddenly on October 15, 2021, at the age of 91. He was born on December 17, 1929 to Michael and Anna (Keller) Wolfbauer. Born in Detroit, he started out as a paperboy, went to St. Mary’s Catholic school and finished High School at Mt. Clemens High, and staying friends with the Fab 5 their whole lifetimes. College was at Wayne state and he started Savair, Inc. with his brother Michael in 1956 in the backyard chicken coop with his sister-in-law Betty as “head bean counter.” Savair sponsored The Mist and The Probe hydroplanes in the Detroit River Races with many friends and family always looking forward to the yearly event. Gene was a mechanic in the US Army in the Korean War. He was proud to be an American and loved this beautiful country. He treasured being President and CEO of Savair after the passing of Michael in 1981. He enjoyed camping with friends and family and boating on the “No Ka Oi”, even joining the Parade of Lights on the Clinton River for two years, including hula dancers, a steel drum band and with as many guests as were allowed on the houseboat. He loved skiing in the Mt. Clemens Ski Club and in the last couple of years has also belonged to the G.M. ski club. Also snowmobiling, hunting and travelling were hobbies that he enjoyed. Eugene was a family man and devoted Dad. He always had a positive attitude and gave unlimited encouragement. His huge circle of friends would all agree that he was a kind, generous and fun-loving person. He cherished the people he knew and spent time with. He was in a multitude of clubs and involved with just as many charitable organizations. He went to Maui every winter since he retired when he was 70 years old. He described it as paradise. Eugene will be dearly missed and never forgotten with treasured memories. His mantra will forever be “Life is Good!” Loving father of Sharyn (Kent) Miller, Alisa (Mark) Jacob, John Wolfbauer and the late Gene Wolfbauer. Dear grandfather of Andrew, Chad, Jacob, Isaac, Devon and Travis. Great grandfather of Kylie. Loving brother of Peggy (the late Lavern) Miller, Lucille (the late Thomas) Dolan, the late Michael (the late Betty) Wolfbauer and Bernadette (the late Robert) Bauman. Also survived by many nieces, nephews, cousins and many friends. Visitation Wednesday 3-8pm and Thursday 2-8pm at Wasik Funeral Home Inc., 49150 Schoenherr Rd (N of 22 mile Rd.) Shelby Township. Instate at church 9:30am until 10:00am Funeral Mass at St. Therese of Lisieux Church 48115 Schoenherr Rd, Shelby Township. In lieu of flowers donations addressed to Leader Dogs For the Blind or Veterans of Foreign War (VFW) Post 129 Chapter 3908.

Eugene Anthony Wolfbauer passed away suddenly on October 15, 2021, at the age of 91. He was born on December 17, 1929 to Michael and Anna (Keller) Wolfbauer. Born in Detroit, he started out as a paperboy, went to St. Mary&#8217;s Catholic... View Obituary & Service Information

The family of Eugene A. Wolfbauer created this Life Tributes page to make it easy to share your memories.

Send flowers to the Wolfbauer family.