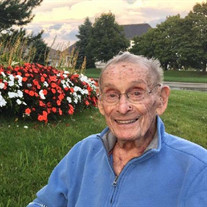 Edwin Earl Hahn passed away on Monday, February 8th at the age of 100. He was born in Detroit on March 25, 1920 to Gustave and Anna (Baltzar) Hahn. Gustave and Anna had four boys; Edwin (Ed) was a twin and the youngest. His twin Irwin died of diphtheria in 1924. Ed grew up on the east side of Detroit, attended Cass Technical High School and enrolled at Michigan State University before volunteering to serve in WWII in 1943 with the Army Air Corps. During flight school, he was trained as a navigator for the Douglas B-18 bomber. After the war, Ed settled into a career as a skilled tool and die maker. Ed met Lorraine Marie Carney in 1946, having grown up directly across the street from each other. They married in July 1949 at Saints Peter & Paul Church in Detroit and crossed the country by car to Los Angeles for their honeymoon. Ed was an avid outdoorsman, and he and Lorraine raised their five children to appreciate the outdoors. Family outings included fishing and camping trips, ice-skating, tobogganing, and trips to local public pools and regional parks. But golf was his true passion, and he played frequently with his two brothers Ralph and Harold. Eventually Lorraine joined him on the course and developed her own passion for the game, and together they also enjoyed playing cards with friends and square dancing. After retirement, Ed remained engaged by honing his home improvement skills and single-handedly built a bedroom and bath on the lower level of their condominium in Brighton. He also became an avid reader and frequent visitor to the local library and knew all the staff members by name. Ed is survived by his wife Lorraine, their four children Kenneth (Kathleen Missig) Hahn, Eileen (Robert) Rees, Raymond (William Long, Jr.) Hahn, and Barbara Hahn Adams, three grandchildren Bradley, Megan and Eric Adams, and eight nieces and nephews. He was preceded in death by his son James Hahn, his grandson David Hahn, his brothers Harold and Ralph and his brother-in-law William Carney. Visitation is scheduled on Monday, February 15th from noon until 3:00 PM immediately followed by a funeral service at the Wasik Funeral Home, 49150 Schoenherr Rd. (N. of 22 Mile Rd.), Shelby Township. Interment will take place on Wednesday, February 17th at the Great Lakes National Cemetery in Holly.

Edwin Earl Hahn passed away on Monday, February 8th at the age of 100. He was born in Detroit on March 25, 1920 to Gustave and Anna (Baltzar) Hahn. Gustave and Anna had four boys; Edwin (Ed) was a twin and the youngest. His twin Irwin died... View Obituary & Service Information

The family of Edwin E. Hahn created this Life Tributes page to make it easy to share your memories.

Edwin Earl Hahn passed away on Monday, February 8th at the age...

Send flowers to the Hahn family.