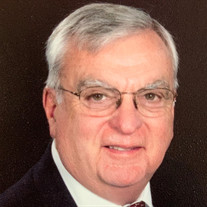 Edward Gerard Rago was born December 19, 1938 in Detroit, MI to the late Edward A. and Margaret (Livernois). He passed away peacefully at home on July 29, 2021 at the age of 82. Beloved husband of the late Brenda (Yagelski). Dearest father of Christine (Brian) Pencak and Steven (Rachel) Rago. Loving Papa to Brandon and Kathleen Pencak and Nicole, Jonathan, Bradley and Ryan Rago. Cherished brother to Margaret (Jack) Shaughnessy, Virginia (Ralph) Hayes and the late MaryAnn (John) Barletta. He was a kind, loving Uncle to many nieces and nephews. Ed graduated Servite High School in 1956. He went onto graduate from Wayne State University in 1960. He then met and married his loving wife Brenda in 1962. They lived in Detroit, raising their family on Edmore Dr. Both were active members of St. Veronica Parish in Eastpointe, MI. He served as a Sergeant in the Army Reserves from 1963 to 1967. Ed began his career in 1960 with the City of Detroit in the Planning Department. Moving to the Budget Department in 1964. He was appointed Deputy Finance Director in 1990 by Mayor Coleman A. Young. Subsequently served as Budget Director from 1991 through his retirement in 1995, serving both Mayor Young and Mayor Dennis Archer. Following his retirement from the City of Detroit, he and Brenda moved to Washington Township. He enjoyed being involved in his neighbor associations. He spent his time with his grandchildren, attending Detroit Tigers games and organizing several reunions. He and Brenda enjoyed traveling and spending winters in Florida. Professionally he continued to consult for the City of Detroit. He was appointed by Governor John Engler as a member of the committee charged with managing the Highland Park bankruptcy. Ed was viewed as an expert on the City of Detroit’s finances, providing information to the Detroit News and Detroit Free Press on several occasions. Ed will be remembered as a loyal Detroit Tigers fan. He was a life-long Detroiter and had a passion for the City. He always enjoyed an ice cold beer and dinner out with family or friends. Ed was a kind, gentle man with a generous and loving heart. He will be sorely missed. Visitation for Edward will be on Friday, August 6, 2021 from 2-8 p.m. Instate Saturday at the church at 9:30 for a 10 a.m. funeral mass at St. John Vianney Catholic Church 54045 Schoenherr Rd. (N. of 24 Mile Rd.) Shelby Twp. Committal Service at Resurrection Cemetery.

Edward Gerard Rago was born December 19, 1938 in Detroit, MI to the late Edward A. and Margaret (Livernois). He passed away peacefully at home on July 29, 2021 at the age of 82. Beloved husband of the late Brenda (Yagelski). Dearest father of... View Obituary & Service Information

The family of Edward G Rago created this Life Tributes page to make it easy to share your memories.

Send flowers to the Rago family.