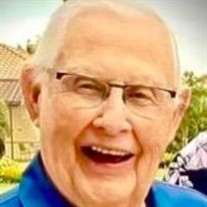 Not sure what to send?

Edward Richard Connelly went peacefully to the Lord on April 13, 2022, in Shelby Township, Michigan at the age of 87 surrounded by family. Edward (Ed) was born on January 5, 1935, in Detroit, Michigan. Ed was the eldest child of six, born to Edward and Una Mae Connelly. Loving husband of Laurice, dear father of Terrence (Patricia) Connelly, Karyn (Jim) Sweeting, Sandra (Mark) Voog, Daniel Connelly, Stephanie Connelly (Ajay Dalal) and the late John Connelly. Dear grandfather of Matthew, Kenneth, Cieran, Samantha (Patrick), Tyler, Andrew, Alec, Abbey, Angeline and Aurice. Dear brother of Patricia (the late Raymond) Birzenski, Michael (the late Joan) Connelly, Jerry (Sandra) Connelly, Colleen (William) Stolberg and the late Thomas Connelly. Ed graduated from the University of Detroit in 1959 where he met his wife of 64 years. He was an active member of Delta Sigma Pi Fraternity. Upon graduation, Ed began a long and successful accounting career in the automotive industry beginning with Chrysler Motors and retiring from Volkswagen of America where he worked in the Banking and Financial arenas. He was devoted to his five children and ten grandchildren. For many years he was an active leader in the Boy Scouts of America. He was a coach for his daughters softball team “Ed’s Champs” and enjoyed watching his children and grandchildren participate in a variety of activities. Ed instilled a strong belief in the value of education and hard work and demonstrated this to his children and grandchildren throughout his life. He was an excellent role model and was proud of all his children's and grandchildren's accomplishments, who were his pride and joy. An avid boater, Ed trailered a ski boat to Big Fish Lake teaching his children and many of their friends how to water-ski. He later traveled with his wife and friends in their 30-foot Sea Ray the "Seven C's” throughout four of the five Great Lakes, even maneuvering the Lake Erie lock system. Ed had many interests, he loved to stay active and before Covid could be found at Shelby Lifetime Fitness most mornings engaged in cycling, swimming, weight lifting, and socializing. Ed was an avid reader and especially enjoyed reading about the Civil War, World War I, and World War II. He was often working on several DIY projects and had a knack for being able to fix anything because he could always “figure it out”. Ed loved serving God through his involvement with his parish. He was a devote Catholic and an usher at St. Sylvester Church in Warren, Michigan for more than twenty years and later a parishioner of St. Therese of Lisieux in Shelby Township. Ed was a kind and honest man with a great sense of humor who always had a smile that lit up a room. He unselfishly gave more than he received and will be missed by his family and friends. His legacy will be in the hearts and minds of all those he touched. Memorial Visitation will be on May 26th from 9:30am until 10 am Funeral Mass at St Therese of Lisieux 48115 Schoenherr Rd-Shelby Twp.) Inurnment at Resurrection Cemetery. In lieu of flowers contributions to Solanus Casey Center 1780 Mt. Elliott St. Detroit, MI 48207 would be appreciated. Expressions of sympathy may be shared with the family @ www.wasikfuneralhome.com

Edward Richard Connelly went peacefully to the Lord on April 13, 2022, in Shelby Township, Michigan at the age of 87 surrounded by family. Edward (Ed) was born on January 5, 1935, in Detroit, Michigan. Ed was the eldest child of six, born to... View Obituary & Service Information

The family of Edward R. Connelly created this Life Tributes page to make it easy to share your memories.

Edward Richard Connelly went peacefully to the Lord on April...