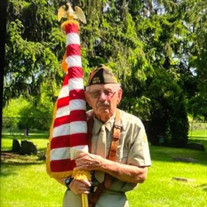 Not sure what to send?

Edward A. Bauer, Jr., a long-time resident of Port Sanilac, MI, passed away peacefully at Sunrise Senior Living on June 16, 2022 at 94 years of age after a brief illness. Mr. Bauer was born on February 10, 1928, to the late Edward and Beatrice (Henry) Bauer. Mr. Bauer is survived by his first wife, Ann, and their son, Edward (Mary) Bauer, III; their grandson, Jayson (Natalie) Bauer; and, their great grandchildren, Ethan Bauer and Avery Bauer, and their daughter, Sandra (Bruce) Baxter; and their grandchildren, Catherine Baxter and Robert Baxter. Mr. Bauer was predeceased by his beloved second wife of 34 years, Marilyn (Tehansky) Bauer, on February 22, 2008, as well as his beloved companion of 14 years, Genee Schulz, on May 26, 2021. Mr. Bauer is also survived by Marilyn’s daughters, Linda (Paul Binienda) Pappas and Darlene (Grainger Goodman) Pappas; grandchildren, Dennis Gentz, Jennifer (Matthew Jaczkowski) Gentz, and Adam (Amanda Ervin) Schall; and, his great grandchildren, Christina (Frank) Torchia, Stephanie Gentz, Carson Schall, and Carleigh Schall. He is also survived by William (Carolyn) Gentz and David (Debbie) Schall. Mr. Bauer was a proud United States Army veteran and served in both World War II and the Korean War. He was extremely active with the Port Sanilac VFW Post #8872. He just recently participated in the Blessing of Veterans’ Graves at five Thumb area cemeteries and the Blessing of the Fleet. He was also a member of the American Legion, Moose Lodge and was a past Master Mason of the Masonic Temple. Mr. Bauer was employed with Chrysler Corporation for many years and, at the time of his retirement over 35 years ago, he was the plant manager for the Eldon Axle Plant. Following his retirement, he moved to Port Sanilac, MI and spent his winters in Florida, first in Venice with Marilyn and then in Lake Wales with Genee. This past winter, Mr. Bauer spent his time in Zephyrhills, FL, with his son, Eddie, which he immensely enjoyed, and he made many new friends while there. Mr. Bauer had many, many friends both here in Michigan and in Florida. Mr. Bauer enjoyed boating and fishing, as well as bowling, playing cards and shooting pool. He was also an avid golfer – playing golf on his 94th birthday in Zephyrhills with his son, Eddie, and granddaughter, Jennifer – he shot a 101! He golfed right up until he became ill. He was the secretary for his golf league, the Duffers, a position he thought about passing on to someone younger, but the “guys” wouldn’t let him. A short military service, conducted by the VFW Post #8872, will be held on July 10, 2022 at 12:30 p.m. at Harbor Park in downtown Port Sanilac, MI with a Celebration of Life immediately following at the Blue Water Grill, 8 North Ridge Road, Port Sanilac, MI 48469 (also in downtown Port Sanilac). Private interment will be held at Great Lakes National Cemetery in Holly, MI. Memorial contributions may be made to the VFW Post #8872, P.O. Box 245, Port Sanilac, MI 48469.

Edward A. Bauer, Jr., a long-time resident of Port Sanilac, MI, passed away peacefully at Sunrise Senior Living on June 16, 2022 at 94 years of age after a brief illness. Mr. Bauer was born on February 10, 1928, to the late Edward and Beatrice... View Obituary & Service Information

The family of Edward A. Bauer Jr. created this Life Tributes page to make it easy to share your memories.