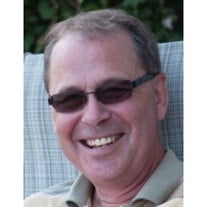 Douglas Paul Stark age 60 passed away June 1, 2020. Doug was born February 14, 1960 in Toledo Ohio. Doug is survived by his loving wife Laura (nee Smith) of nearly 30 years, his devoted children, Eli (Katie), Austin, Emma, Isaac, Oliver and his siblings Barbara (David) Ziesmer, Randy (Pat) Stark and Maureen Stark. He is also survived by his brothers in law and wonderful friends Kevin (Karin) Smith, Doug (Shellie) and Steve (Jodie) Smith and mother-in-law Judy Smith. He was preceded in death by his parents Maurice and Helen Stark. Doug leaves cherished memories to his many nieces and nephews as well as a lifetime of friends and colleagues. Doug was a gifted determined athlete fondly remembered for his love and skill in all sports, especially baseball. Doug was one of the longest serving Michigan High School Athletic Association referees serving as an official throughout metro Detroit for more than 32 years. Doug's childhood could realistically be seen as one long ball game. Doug graduated from Temperance Bedford High School in 1978 and the University of Toledo in 1987. He received his Master's of Finance from Walsh College in 1989. Doug served the Henry Ford Health system for the past 33 years in a number of roles most recently as the Director of Finance for the Henry Ford OptimEyes Eye Care division. Doug was a devoted father and husband and especially looked forward to time with his family at their half Stark lake cottage in Croswell. Just spending time with his family gardening, fishing and enjoying the wildlife was very special to him. He will be forever remembered for his charity, compassion and willingness to always be there for his family, friends and community. He leaves cherished memories of his infectious laughter, humor and devotion to family. Doug was an active fan of most sports with special support for all things Green Bay Packers. He thoroughly enjoyed Tiger ball games at Comerica Park and supporting UM at the big house. The family will be having a private visitation and committal service. A celebration of life will be planned at a later date. The family intends that donations and memorials will be pledged to charities at a later date.

The family of Douglas Paul Stark created this Life Tributes page to make it easy to share your memories.

Send flowers to the Stark family.