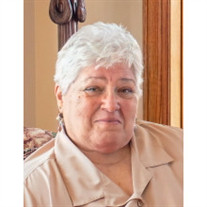 Delena June Haaff passed away on January 5, 2022, at the age of 87, in Chesterfield Township. She was born on September 29, 1934 to James William and Claire Pauline (Hicks) Parker in Harrisburg, PA. Beloved wife of the late Ralph E. Haaff. Loving... View Obituary & Service Information

The family of Delena June Haaff created this Life Tributes page to make it easy to share your memories.

Send flowers to the Haaff family.