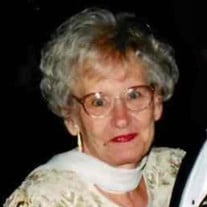 Christine E. Zebrowski, of Warren, passed away Tuesday, December 21, 2021, at the age of 88. She was born March 9, 1933 to the late Frank and Jesse Blocki. Beloved wife of the late Erwin. Dearest mother of Dora, Paul (Raquel), Norman (Laura),... View Obituary & Service Information

The family of Christine E. Zebrowski created this Life Tributes page to make it easy to share your memories.

Send flowers to the Zebrowski family.