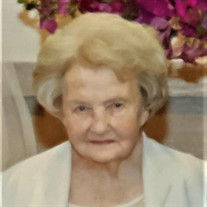 Catherine R. Garofalo, of Clinton Township, passed away Saturday, February 5, 2022 at the age of 92. She was born March 12, 1929 in Detroit, Michigan to George and Elizabeth (Shea) Haddas. Catherine was the true middle child of 5 children being born between 2 sets of twins. She grew up in Detroit and met her future husband when his family moved in next door in the late 1940's. They were married June 2, 1951. In 1969 she began her dedicated 23 year career as the librarian at St. Raymond Catholic School in Detroit. She loved her job. From the staff, volunteers to the students, she was an icon to the school and adored by everyone there. Everyone knew and appreciated her caring demeanor. Mrs. Garofalo was a pillar for all the students that passed through the halls and library of St. Raymond's. Catherine and Anthony lived in Detroit and raised their family until they moved to Roseville in 1993. For 22 years they built a wonderful home and made many memories together and with their family until Anthony passed away in April of 2015 after almost 64 years of marriage. Catherine remained in the home until her health would not allow her to live on her own any longer. In January of 2017 she moved into Legacy Senior Living and was cared for by the amazing staff of caregivers. They took such wonderful care of Catherine up until she passed away and words cannot express how thankful our family is that we found them. She was a meticulous homemaker and exceptional baker. Her oatmeal cookies were legendary! She enjoyed spending time with her family especially when the grandchildren and great grandchildren came along. Raising 3 children of her own, she ran a tight ship and the kids knew they couldn't get away with anything, but the knew they were truly loved! Loving and devoted wife of the late Anthony. Dear mother of Anthony (Nancy), Andrea (Scott) Smith and the late Richard. Adored grandmother of Angela (Jim) Caradonna, Steven Smith, Laura (Nick) Smith, Brian (Jessica) Smith and Tony (Cait) Garofalo. Precious great grandmother of Taylor, Maria, Olivia, Vince, Addison, Riley, Morgan and Tiffany. She was predeceased by her older twin sisters, Mildred Lawrenchuk and Lorraine Ridley and younger twin siblings, George Haddas and Geraldine Garofalo. Catherine is also survived by many loving nieces and nephews. Visitation Wednesday 3-8 p.m. at the Wasik Funeral Home, Inc., 11470 Thirteen Mile Road (west of Hoover) Warren. Instate Thursday 10 a.m. until time of Funeral Mass 11 a.m. at St. Hubert Catholic Church, 38775 Prentiss St. (south of Metro Parkway) Harrison Township. Interment Resurrection Cemetery.

Catherine R. Garofalo, of Clinton Township, passed away Saturday, February 5, 2022 at the age of 92. She was born March 12, 1929 in Detroit, Michigan to George and Elizabeth (Shea) Haddas. Catherine was the true middle child of 5 children being... View Obituary & Service Information

The family of Catherine R. Garofalo created this Life Tributes page to make it easy to share your memories.

Send flowers to the Garofalo family.